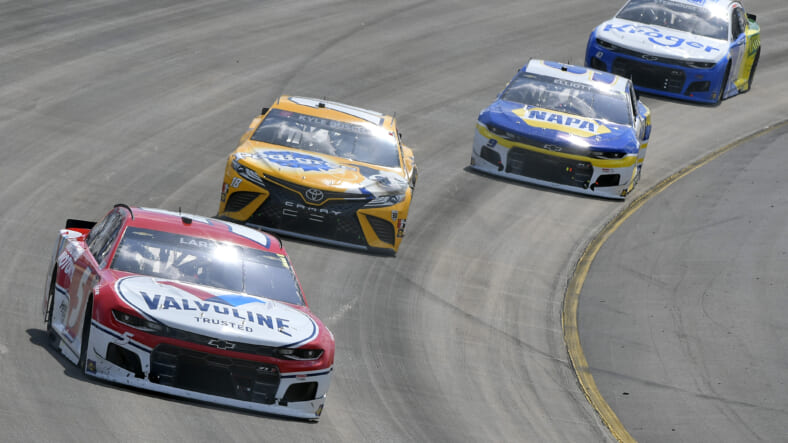 Kyle Larson continued his dominant ways on the NASCAR Cup Series circuit, which ran at Nashville Superspeedway for the first time.

A new track produced the same result for the NASCAR Cup Series on Sunday afternoon.

Kyle Larson once again dominated proceedings on the premier racing circuit, leading 264 of 300 laps in the inaugural Cup race at Nashville Superspeedway to win the Ally 400. Larson’s No. 5 Hendrick Motorsports Chevrolet has now won each of the last four Cup Series events, including last weekend’s NASCAR All-Star Race at Texas. HMS vehicles have won five consecutive official points events overall, helping the team strengthen its grip on the record for most team victories in Cup Series history (now at 271 after Sunday).

“It was another good one. Weâ€™ve had probably the best race car on the racetrack for at least a month and a half, so good to take advantage of it, get another win,” Larson said after the win. (We were) able to jump out to a lead right from the get-go, basically lead the rest of the race. If it wasnâ€™t for the cautions at the ends of the stages, we had a near-perfect day.”

Larson took the lead on lap 6, shortly after the race restarted following Quin Houff’s wreck on the opening lap due to a lost tire. The No. 5 went three-wide with Kyle Busch and pole-sitter Aric Almirola to nab the top spot, setting the tone for familiar domination. HMS teammate Chase Elliott was able to take the first 90-lap stage after staying out during a caution induced by Chris Buescher and Justin Haley’s wreck on the 77th circuit. It was all Larson after that, as he coasted to his 10th career Cup Series victory and series-best fourth of the 2021 season.

“Itâ€™s awesome to get multiple wins in a row now in the Cup Series…just cool to do that,” he said. “I didnâ€™t think that was possible ever for me in the Cup Series anyways. Iâ€™ve gone on streaks in dirt racing and stuff before, but never been close to doing anything like that in Cup. Itâ€™s been awesome. To get to now double-digit point-paying wins is great. Iâ€™d like to keep winning and keep inching my name up the winnerâ€™s list not only at NASCAR but at Hendrick Motorsports, too. I think thatâ€™s important to me.”

Larson has now led a career-best 1,426 laps this season (tops in the series and 670 ahead of points-leader Denny Hamlin) and is the first driver to win three straight points races since Brad Keselowski in 2018. The No. 5 is also only 10 points behind Hamlin for the Cup Series points lead, which affords a 15-point bonus for when the NASCAR playoffs begin in September.

This weekend marked NASCAR’s return to the Music City area at the newly renovated 1.333-mile track in Lebanon. The track previously held events in the NASCAR Xfinity and Truck Series (as well as the IndyCar Series) from 2001 through 2011, but the Cup Series had not been to Nashville since 1984 at Fairgrounds Speedway. Larson praised the fans’ enthusiasm and relished this win a little more due to its significance on the NASCAR calendar.

“I stayed in the city this week. I got to see how pumped up all the race fans were for the race this weekend,” he said. “There (were) a lot of fans that recognized me throughout the last couple days walking around, wishing me good luck, saying how excited they were to go to the race. Thatâ€™s what kind of made me feel extra special about this race, is just seeing how excited the fans were to go to a new venue, sort of getting to watch some Cup racing in Nashville.”

The NASCAR Cup Series returns to action next weekend at Pocono Raceway, which will host a doubleheader on Saturday (3 p.m. ET, NBCSN) and Sunday (3:30 p.m. ET, NBCSN).