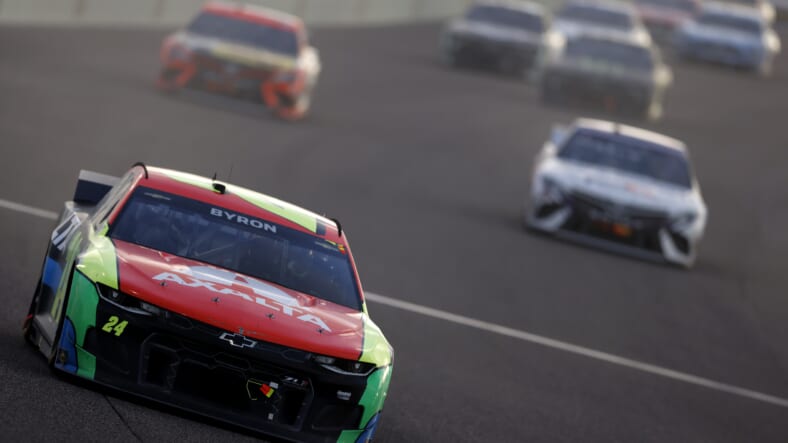 No team in the NASCAR Cup Series has been on a longer roll than Byron’s No. 24 Hendrick Motorsports Chevrolet group.

The NASCAR Cup Series’ official throwback festivities commence next weekend at Darlington Raceway. Thanks to the efforts of the No. 24 Hendrick Motorsports Chevrolet team, fans and observers have been getting a steady dose of nostalgics when they look at the leaderboard.

No vehicle on the premier Cup Series circuit has been hotter than the Camaro piloted by William Byron, who has earned top ten finishes in each of the last eight races, a streak that began with a win at Homestead-Miami Speedway in February. That win allowed him to become the first driver to drive Rick Hendrick’s No. 24 Chevrolet to victory lane since Jeff Gordon’s 93rd and final Cup Series win at Martinsville in 2015.

The streak has allowed Byron to create an average finish of 10.3, second-best amongst full-time drivers behind Denny Hamlin, the only other driver with eight top tens over the first ten races.

The scariest part? Byron feels that the No. 24 squad has emerged from one of the harder portions of the Cup Series schedule. The series resumes action on Sunday at Kansas Speedway for the Buschy McBusch Race 400 (3 p.m. ET, FS1). He has finished in the top ten in each of the last three visits to the Sunflower State, including an eighth-place posting in the most recent endeavor last October. His Chevrolet will start in the front row next to Brad Keselowski.

“I think for us, weâ€™re going into some of these tracks that are some of our best tracks,” Byron said in a Wednesday conference call. “I feel really confident that Kansas is a place we can go there and try to win. I think weâ€™ve gotten through a couple of obstacles with the Bristol dirt race. That was definitely one that we thought we were going to really struggle, (as well as) Talladega and Richmond.”

Overcoming obstacles has been a common theme of Byron’s season. Despite relatively little dirt experience he finished sixth at Bristol and overcame a spin at Talladega last weekend to finish in the runner-up spot behind Keselowski’s Ford. In between, Byron scored his best finish at Richmond, a site where he’s often struggled to stay on the lead lap.

These conquests have allowed Byron to develop confidence, which he credits for setting the pace for what’s been his most lucrative season to date. This campaign is Byron’s fourth in the Cup Series, his best standings finish being 11th in 2019. He entered the circuit with a fair amount of hype after taking home the 2017 Xfinity Series title as a 20-year-old driving a Chevrolet owned by Dale Earnhardt Jr.

“For two years, I really felt out of the box,” Byron said of his first two Cup seasons. “I felt uncomfortable I guess, in a way. I kind of felt like in order to produce the results and be up front, I had to really drive kind of over your head in a way.”

Even with the newly built confidence, not every race is going to end in victory lane, but Byron said the perfect source was finding wins that didn’t exactly show up on the scoring pylons.

“In NASCAR, I think performance is that needle-mover for confidence,” Byron said. “The biggest thing I heard coming from Legend Cars is oh man, youâ€™re not going to win as much. So, how do you find confidence in other ways? Well, I think it comes from working with your crew chief and figuring out how to make the car faster. There are small victories in finishing top ten at Richmond, which has been a track where I usually get lapped. There are small wins along the way that help build that confidence.â€

“(Today,) I donâ€™t feel uncomfortable at all. I donâ€™t look at any of the people I race against as any different…I raced for Kyle Busch, so that was nerve-wracking to race against him every week. And those things were there and those elements of feeling like I was out of place were there. Once you get past that feeling, which, you have to have those results to have that feeling go away, so it comes hand-in-hand with results.â€

Byron’s confidence is healthily subsidized by his chemistry with a relatively new crew chief in Rudy Fugle. The pair previously collaborated during the 2016 NASCAR Camping World Truck Series season, winning seven races in a truck owned the aforementioned Busch. He also credited last season’s crew chief-turned-vice president of competition Chad Knaus (a seven-time champion pit boss with Jimmie Johnson) for his work as well as the hard-working men and women in the HMS shop.

The No. 24’s return to glory is perhaps one the NASCAR world should’ve seen coming. Byron worked his way into the NASCAR playoffs with a win in the regular season finale at Daytona. Though he failed to advance past the first round of the postseason, momentum and confidence were developed with four top ten finishes over the last six races.

True to form, Byron said there was no singular, lightswitch-flipping moment. He instead credited teammates for assistance in a path forward, including those beyond the No. 24 garage stall. Defending Cup Series champion Chase Elliott has been a particularly strong mentor, a relationship that includes providing a lofty benchmark to live up to.

“I think thereâ€™s not really a specific turning point. I think weâ€™ve really relied heavily on our teammates,” Byron said. “Chase has run really well over the past six or seven months and winning the championship and all that. Weâ€™ve relied heavily on some of their set-ups and some of the things that Chase says; trying to get my driving style a little bit closer to what the set-up needs and the car needs. Itâ€™s a little bit of everything.”

“Weâ€™ve got to try to match that standard or try to improve upon it. We have a lot of respect for (Elliott’s No. 9 team) and their effort and the way that they execute races, the way that Chase drives, and all those things. So, we try to work on that and make it our own.â€

Byron’s next win could prove historic: Hendrick Motorsports is currently two wins away from tying Petty Enterprises for the most Cup Series victories by one team, a tally aided by 2021 wins from Byron and teammates Kyle Larson (Las Vegas) and Alex Bowman (Richmond).