Here is what’s at stake at GLORY 79: Collision 3 this weekend 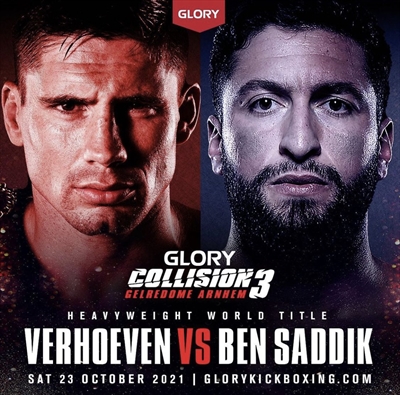 Fresh off the heels of a historic boxing trilogy bout between two legendary fighters in their prime, the combat sports world will get yet another contest of the sort when Rico Verhoeven (58-10, 15 KO’s) and Jamal Ben Saddik (36-8, 29 KO’s) square off this Saturday at GLORY 79: Collision 3 in the Netherlands.

Aptly named, this kickboxing spectacle is sure to arise goosebumps among the hardcore fight fans that make up Glory’s target audience. Founded in 2012, the GLORY kickboxing organization is looking to grab more of a hold of the combat sports space and is well on its way with a massive event such as this.

Making this fight most interesting – even on top of the top 0.1% skill-level – is the utter disdain these two fighters share for each other both inside and outside of the ring. Having each finished each other during their two prior fights, this contest boasts massive stakes that is sure to further propel the winner toward even bigger stardom.

The current champion, Rico Verhoeven, is currently riding an unheard-of 14-fight winning streak into Saturday night’s bout and is a staggering 21-1 inside the GLORY promotion, overall. In a standup sport where the masterful skill levels of the fighters is so close, reeling off that type of win streak is unparalleled.

On the other side, Jamal Ben Saddik is one of the few men (and was the first, overall) on planet earth that to claim a stoppage win over Verhoeven, while having also knocked out the promotion (and in effect, the world)’s #2-ranked heavyweight in Benjamin Adegbuyi in his last fight. A winner of four in a row in his own right, Ben Saddik is coming off of a three-year layoff having not fought since 2018.

Still, Rico Verhoeven will have his hands full, and then some, against Ben Saddik and the monster right hand he carries with him into each and every fight. At any moment, Ben Saddik is liable to land a flush straight right that can end Rico’s night, yet, Verhoeven surely has the advantage in terms of overall technique and stamina.

Overall, Ben Saddik carries with him a freakish 80% career finishing rate, while Verhoeven’s 22% knockout rate is more representative of a fighter that is looking to be in it for the long haul and win on points — it is a clash of styles, to be sure.

‘The Goliath’ (Jamal Ben Saddik) did not get his nickname for no reason, as the Morocan native stands 6’9” and weighs in around 275 pounds, typically. At 6’5” 265 pounds, Rico Verhoeven, commonly known as ‘The King of Kickboxing’ is rarely the smaller man in the cage. Most believe that Ben Saddik will have to finish this one early to have a chance (he KO’D Rico in the 1st round of their first fight), with his chance of victory dropping in each of the rounds to follow.

‘The Goliath’ is a last-minute replacement of sorts, as former UFC star Alistair Overeem was originally scheduled to make his much anticipated promitional debut for GLORY but was forced to pull out due to injury.

Fans around the globe are not complaining, however, as the bad blood in this bout is palpable, while it will help settle the even 1-1 score between the (basically) undisputed two best heavyweights in the world.

The main card begins at 2PM EST and you can buy the event here for $24.99. The preliminary card will be available for free starting at 12PM EST here on Youtube, amongst other platforms.