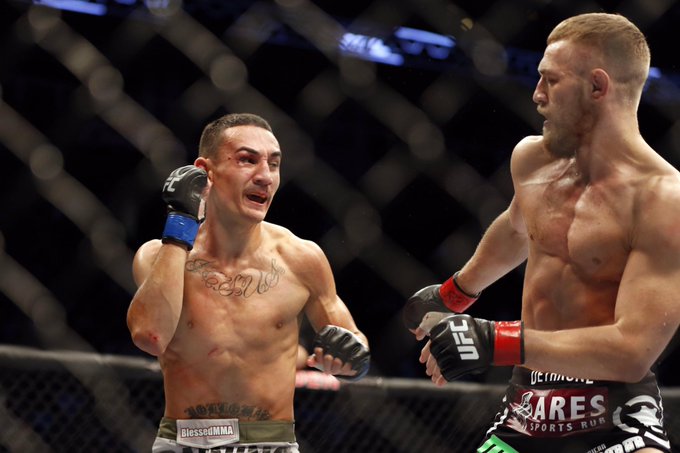 Yes, the UFC should undoubtedly book the Conor McGregor and Max Holloway rematch.

However, the operative word in that sentence is very much ‘should’, as there are far too many shaky variables currently at play to really ‘book’ this fight in good faith. That does not mean the UFC shouldn’t be stacking the deck in order to allow things to unfold in this manner though and have a ‘handshake agreement’ of sorts between the two tantalizing fighters.

Even though the two superstars were at similar points in their careers during the epic first bout all the way back in 2013, now, McGregor and Holloway are in totally different places. Most notably, McGregor seemingly can’t get out of his own way outside of the octagon as he has found himself fighting with UFC fans more often recently than against actual UFC fighters.

As popular as Conor McGregor (22-6 MMA, 10-4 UFC) is amongst UFC fans (and Dana White), though, that just might not even matter. As we’ve seen in the past, if there is a fight that Conor McGregor wants, he gets it, as the former ‘champ-champ’ could garner a million pay-per-views against just about any fighter on the UFC roster — let alone one as popular as Max Holloway (21-6 MMA, 17-6 UFC).

While I understand that it’s mainly annoying to UFC fans to have to hear about a new potential Conor McGregor matchup just about every other day, I’m here to tell you that this one actually makes a ton of sense. More importantly, Max Holloway has shown time and time again that he is not the difficult diva-type that many of his peers are when it comes to nailing down bouts with Dana White and the rest of the UFC brass.

Right now, there seems to be little left for Holloway to do inside the 145-pound featherweight division. Whether or not he’ll get an unprecedented third fight (after losing the first two) against current champion Alexander Volkanovski remains to be seen, but, this would be a hell of a consolation prize. Still just 29, Holloway surely has many great years left in the promotion, but the chance to make the type of money he would make in this fight will likely never materialize again.

For Pete’s sake, the two even share identical professional records at 22-6, overall.

The major obstacle that lurks between this dream matchup taking place is, of course, Conor McGregor’s health as he recovers from a nasty broken lower leg he suffered against Dustin Poirier this past July. The timeline for this proposed fight remains unclear, although Holloway suggested a March date on Twitter yesterday.

Now, the seminal point to this entire argument: does it really make sense? Like, for all parties involved?

To me, it very much does. For starters, it has long been believed that Max Holloway would eventually make his way up to the 155-pound lightweight division. In fact, Holloway already fought for the 155-pound title back in 2019 at UFC 236 against Dustin Poirier for the interim championship. As entertaining as it was to see Holloway fight at a more comfortable weight for him, he ultimately lost that bout in a back-and-forth, but dominant, decision win for Poirier.

Conor McGregor made the choice to stop killing himself (quite literally) to get all the way down to 145 pounds all the way back in 2016, shortly after he won the unified 145-pound featherweight title (he never defended it). That decision worked out well for him for a time, and Holloway surely can look at it as a blueprint of sorts for himself.

McGregor’s punching power did follow him along to the heavier weight class which is always the concern of a fighter pondering moving up a division. Naturally, it is believed the McGregor and Holloway walk around at similar weights on a day-to-day basis. Holloway has been a consummate professional – just like McGregor was – at making that 145-pound limit, yet, it is easy to see the strain it puts on him each time he is forced to do so.

Moving up to 155 would open up all types of possibilities for Holloway, whom Tapology already ranks as a top-20 all-time MMA fighter at just 29-years-old. On the other hand, McGregor needs to find the right blend between a big name and someone who still is at the top of their game; this checks those boxes. Fans and the promotion, as a whole, will not be so inclined to see him rough up another Donald Cerrone-type fighter again.

If Conor McGregor truly wants to make one last run towards meaningful title contention, this is the fight that gives him the best chance to do so. While it is hard to imagine a world where giving a fighter championship consideration after losing two of their last three – which is what would be the case if McGregor were to beat Holloway – this would be a legitimate enough win to do so for ‘The Notorious’.

At the same time, a dominant win over a still in-his-prime McGregor would catapult Holloway right to the very top of what many believe to be the best division in all of MMA (not just the UFC). It would sell an obscene amount of pay-per-views, and would be a rematch that just about any fight fan would want to see.

Mark this one down as one of the rare Conor McGregor fight rumors that actually makes a boatload of sense.