Sean O’Malley Has Proven How Special of a Fighter He Is; But Is It Time for Him to Take On A Top Ten Ranked Fight? 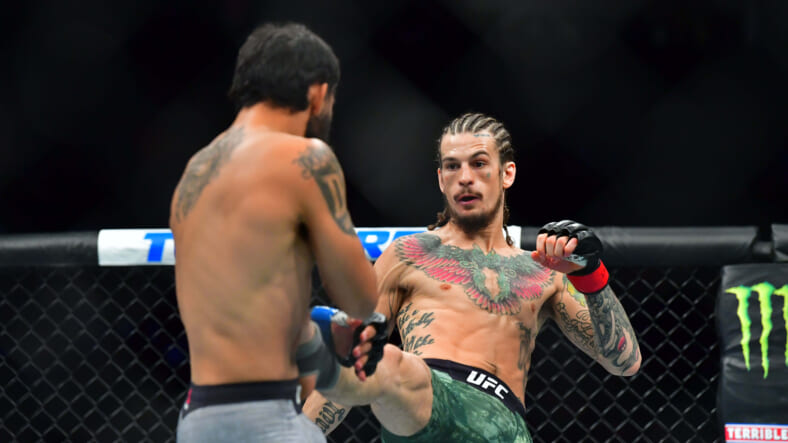 Over the last three years, the UFC has produced some phenomenal young talent, men and women alike. Living up to their potential at a very young age, these starlets have the ability to shape the UFC’s next generation of greatness and have already shown how dominant they can be. This has been demonstrated in the likes of Jimmy Crute, Miranda Maverick, Song Yadong, and Umar Nurmagomedov, to name a few. But looming largely at the forefront of this talented group of youngsters has been no one but the bright, rainbow-haired, striking wonder boy in Sean O’Malley.

Rising to fame through Dana White’s Contender Series back in 2017, O’Malley has been a sensation ever since he’s stepped foot in the octagon and has illustrated how deadly his striking can be (ESPN). After proving his knockout power and legitimacy against Eddie Wineland last June, O’Malley suffered a terrible foot drop injury against his opponent Marlon Vera later that summer, which resulted in his first UFC loss and sidelined him for several months (ESPN). Despite suffering such a crippling injury, O’Malley made his return to the octagon a little over six months later for UFC 260 on March 27th, emphatically reasserting his presence in the Bantamweight division by delivering a brutal TKO against Thomas Almeida (ESPN). Looking healthy and comfortable, O’Malley pressured and tormented Almeida with a flurry of big punches and leg kicks, showcasing once again just what kind of striking talent he brings to this stacked Bantamweight division.

But after turning 26 last fall and virtually dominating every fight he’s been in, O’Malley has proven just how gifted he is and needs to be granted his first real test at 135. Though Wineland, Vera, and Almeida all made for fair opponents, O’Malley’s actions in the octagon have spoken loud and clear, and it is time for him to match up with a Top Ten ranked opponent for his next fight. Moreover, O’Malley is entering his prime, and as a young fighter, he still has so much to prove but won’t be able to do so if he keeps on getting matchups that won’t test his overall skill set as a mixed martial artist. And as a result, it’s time for Dana White to explore bigger fights for him to take on.

However, with that said, who makes for the best matchup against the Suga Show? Prior to fighting Vera several months ago, O’Malley already felt he deserved a Top Five fight (ESPN). Moreover, he recently reinforced this bold claim by taunting a potential challenge from the number one contender in the division, in Petr Yan (ESPN). Though he does have a fair point to shoot for the stars considering what he’s accomplished, O’Malley still has a handful of ranked fighters in front of him that not only have been waiting and working toward a title shot as well, but as a whole, could also really give him a run for his money. And if there’s anything left for O’Malley to prove before he gets a title shot, it’s that whether he can stand with the best of them and take down at least one of the Top Ten fighters in his division. So without further ado, here are the top three opponents O’Malley should fight next:

3. Dominick Cruz: This matchup would be outstanding for a variety of different reasons and could potentially come to fruition this year. Though he hasn’t called out anyone since his victory against Casey Kenny, Cruz has stated that he is open to fighting O’Malley and is certainly looking to get in another fight by the end of this year, according to a recent interview he had on the Ariel Helwani Show (ESPN). But despite that, there’s a bunch of significant other reasons why this matchup is as good as it is. For starters, Cruz has an incredible set of credentials on his resume and has put together an impressive record of 23 wins with only 3 losses over his career (ESPN). Not only is Cruz a two-time Bantamweight Champion, taking out some of the best fighters we’ve seen in the division’s history. But on top of that, his style and approach toward mixed martial arts is very unorthodox with his constant, differentiating movements and feints, which would present O’Malley with an unfamiliar challenge and a new level of adversity he hasn’t been exposed to yet. In short, considering how special and unique of a fighter Cruz has been and still is at 135, O’Malley should relish the opportunity to take on this fight. And if O’Malley were to win, his goal of taking on a Top 5 fight would become guaranteed.

2. Pedro Munhoz: Though he might be fading out of his prime a bit, losing two of his last three fights against both Aljamain Sterling and Frankie Edgar, Munhoz actually makes for a very good matchup for O’Malley, and here’s why. First and foremost, one of the most impressive facts about Munhoz’s career in mixed martial arts is that all five of his losses have either been decided by split or unanimous decisions (ESPN). In other words, Munhoz is one of the toughest fighters in the division and has never been knocked out by anyone in his career, which in itself, is a big challenge for O’Malley who depends on his knockout power to win his fights. On top of that, Munhoz has proven how versatile he can be on the ground and could test O’Malley with his grappling skills as well, something we haven’t seen a whole lot of from O’Malley. When all is said and done, it’s important that O’Malley gets a chance to test his skills against one of the best in this division, someone who can not only can stand and go the distance with him but who can also challenge him in a variety of different ways. And after a big bounce-back victory against Jimmie Rivera earlier this year, Munhoz has shown that he still has what it takes to win in this competitive division. So if O’Malley really wants that Top 5 fight he’s been craving for, taking on Munhoz would certainly bring him one step closer.

1. Marlon Moraes: Since his bout with the former Bantamweight champ Henry Cejudo nearly two years ago, Moraes has really struggled with regaining the menacing and elite fighter status he used to have (ESPN). Losing back-to-back fights against both Cory Sandhagen and Rob Font last year, Moraes has progressively slipped his way down the rankings, and another loss could perpetuate his downfall even further (ESPN). So why does he deserve a fight with O’Malley? Well, there are a few reasons to factor in here. To begin with, both losses Moraes sustained were against the number two and number three ranked fighters in the division in Sandhagen and Font, two fighters that are debatably in their respective primes and have been steadily climbing up the rankings (ESPN). In addition, Moraes will not want to suffer a third loss in a row, and as a result, he’s going to do everything he can to ensure he gets a victory in his next bout. For O’Malley, this makes for a top fight because he not only gets to test his skill against a very well-versed and technically gifted mixed martial artist, but he also would be going up against Moraes’s best work. Though he might appear to be the easiest challenger on this list, it’s important to keep in mind that Moraes did knockout both Rivera and Sterling prior to coming for the belt against Cejudo, demonstrating he can stand with some of the best (ESPN). So if anything, a matchup with Moraes would be perfect for O’Malley and would grant him the opportunity to prove why he deserves a Top 5 fight.