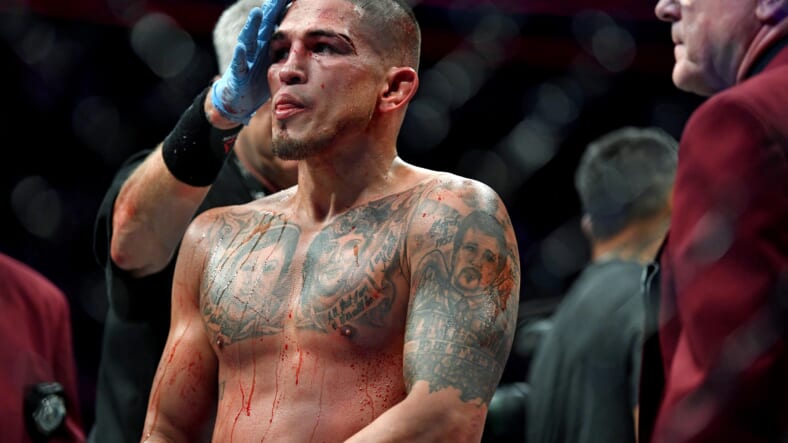 Tonight we saw the PFL playoffs kickoff and we saw the first two finals matches set up. The lightweights and light heavyweights took center stage this evening. In the main event, Anthony “Showtime” Pettis (25-14) was taking on Stevie Ray (25-10).

These two just fought six weeks ago with Ray picking up the submission win. Pettis vowed to get his revenge this evening and he was relishing the chance to get this fight back. Well, the fight didn’t really go according to plan for Showtime.

Much like the rest of his PFL career, the fight was a big disappointment. The first two rounds featured Ray pushing Pettis against the fence and then getting him down for extended periods time. This has been a problem that’s plagued Pettis his entire career.

In the final round at PFL 7, Pettis got his chance to strike with Ray, but he couldn’t put enough together to win. Ultimately, he lost a unanimous decision and he dropped to 1-4 in his PFL career.

Earlier in the evening, Olivier Aubin-Mercier (16-5) and Alex Martinez (10-3) went head-to-head in the other semifinal matchup. This was incredibly one-sided with Aubin-Mercier completely dominating Martinez. He even dropped him twice. Now, Aubin-Mercier and Ray will meet for the PFL lightweight championship.

Kicking off the playoffs tonight was a light heavyweight contest between Rob Wilkinson (16-2) and Delan Monte (9-3). Wilkinson looked absolutely tremendous in this one as he booked his spot in the PFL finals. Wilkinson scored with a flush knee that put Monte away.

Following this was the light heavyweight fight between Omari Akhmedov (24-7-1) and Josh Silveira (9-1). Akhmedov had looked like a destroyer in his first two PFL bouts, but he was taking on someone who knew him extremely well.

Silveira is a training partner of Akhmedov and both men actually trained at the same gym for this fight. Silveira had some success using his wrestling, but his success was not sustained consistently throughout three rounds.

Akhmedov fought with a lot of pressure and landed some pretty good shots throughout. With the more damaging shots and more pressure, Akhmedov was able to get the wins and book his spot in the PFL finals opposite Rob Wilkinson.