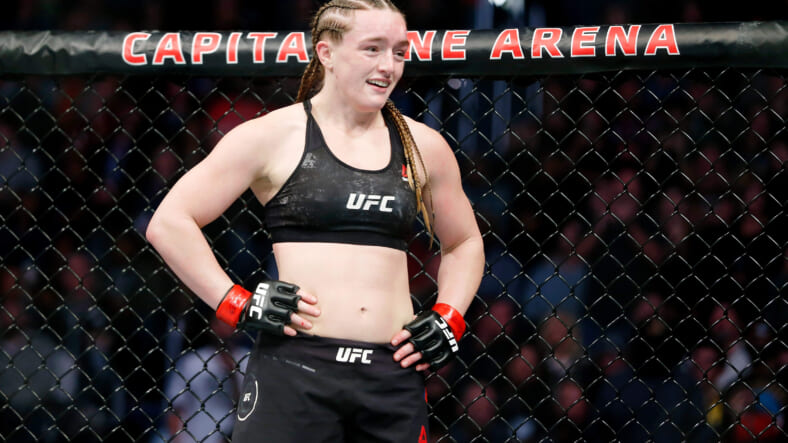 PFL is wasting no time booking one of their big recent signings. Shortly after hearing that they are booking former UFC fighters Shane Burgos and Marlon Moraes against each other at their championship event, we learned yesterday that Aspen Ladd (9-3) has her debut set.

Ladd will make her PFL debut at the championship event on November 25th when she takes on former Bellator featherweight champion Julia Budd (16-4). Budd was brought over to the promotion in an effort to add additional competition for champion Kayla Harrison.

She had a ton of hype behind her debut but ultimately lost to Genah Fabian. Still trying to capitalize on everything, PFL booked Budd against Kayla Harrison in the second match of the season. However, an injury forced Budd off the card and out of action.

Now, she’s back and ready to go for November. Yes, Budd lost to Fabian back in May. However, prior to that, she had only lost to Cris Cyborg, Amanda Nunes, and Ronda Rousey. Just three of the greatest of all time. Budd is a top notch featherweight and she will give Ladd a big test.

Rewind the clock a few years ago and Aspen Ladd was being looked at as a potential UFC champion. She started her career 8-0 and was booked in a title eliminator against Germaine de Randamie. Now, prior to the GDR fight, we saw her really struggle with making weight.

She still did, but was ultimately knocked out in seconds during their fight. Since then, she has only fought twice going 1-2. She’s had a couple of fights cancelled due to her issues making 135 pounds. It’s clear that Ladd cannot be a healthy bantamweight. She knew that and the UFC knew that.

Ultimately, they parted ways. Initially, I thought PFL would be the landing spot and sure enough, they swooped in and signed her. This fight with Budd will take place at 145 pounds but there’s not a definitive answer on what the plans are moving forward after this season.