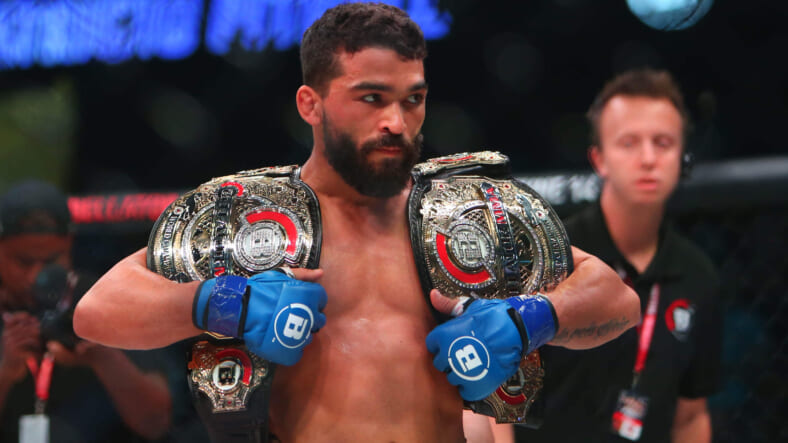 Tonight Bellator returned to action and the best fighter that the promotion has to offer was in the main event. Continuing with the Featherweight Grand Prix, featherweight champion, Patricio “Pitbull” Freire (30-4) took on Pedro Carvalho (11-3).

Patricio Pitbull is one of the very best fighters in the world. Over the years, he’s become a face of Bellator. However, Carvalho was expected to give him a big challenge tonight.

Training under the same coach as Conor McGregor, Carvalho is good wherever the fight goes. He fights extremely long and he’s got slick submissions on the mat. This fight was expected to be a battle.

However, it was evident from the opening bell that these two were on different levels. Carvalho came out and threw some decent strikes trying to pressure the champion. However, Pitbull was just biting his time waiting for his opportunity.

However, Carvalho was able to work his way back up to his feet, but he wouldn’t be there long. Pitbull hurt him bad with another right hand. Then a clean leaping left hook put Carvalho out for good. Pitbull remains the Bellator featherweight champion.

The champ retains with a walk-off! ?

What’s next after Bellator 252

Bellator 252 was supposed to be a tough event for Pitbull and he just stormed through Pedro Carvalho. Odds makers had the odds stacked for Pitbull, but many analyst thought that Carvalho could give Pitbull a tough fight.

Turns out, it was just another walk through the park for Pitbull. After this he will continue on in the Bellator Featherweight Grand Prix. His next opponent is already decided as he will take on Emmanuel Sanchez (19-4) who won earlier in the evening.

These two men fought back in 2018 with Pitbull winning by unanimous decision. I have no idea who is going to be the man who can take away that crown from Pitbull. He is truly something special.