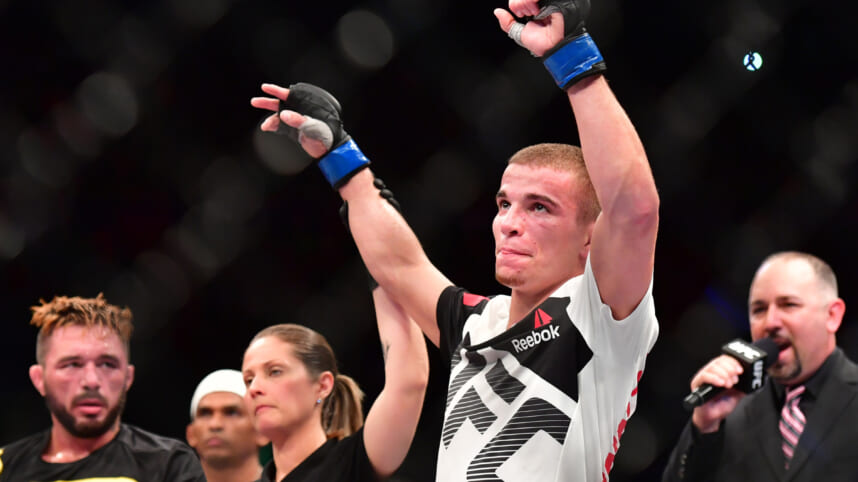 On the main card of Bellator 286, one of the more hyped prospects in MMA history was looking to book a ticket to a title fight. Aaron Pico (10-3) was looking to win his seventh fight in a row as he took on veteran Jeremy Kennedy (17-3).

Kennedy was 2-1 entering tonight in the Bellator cage with the lone loss coming to Adam Borics. In his last fight, he was sensational in defeating Emmanuel Sanchez. However, tonight he faced a much stiffer challenge.

Aaron Pico was thrown right into the deep end when he was just a teenager entering Bellator. That showed when he was just 4-3 after seven fights with three stoppage losses. However, then he made the switch to Jackson-Wink and changed his game plan and his career.

Since making that change, Pico has looked unstoppable. He doesn’t even look like the same fighter. Pico has gone 6-0 with only one fight going the distance. In that one fight, Pico was utterly dominant.

The Bellator 286 featherweight contest kicked off with a quick touch of the gloves. Pico opens with pressure and a big 1-2 briefly stuns Kennedy right away. Cage pressure here from Pico and Kennedy lands a nice knee to the body on the break.

Big low kick and jab from Kennedy. Takedown attempt now from Kennedy and he gets Pico down briefly. However, Pico immediately pops up. Kennedy doing a nice job of landing knees to the thigh here in the clinch. Nice control here from Jeremy Kennedy.

It looks like Pico’s shoulder has popped out. Pico is trying to pop his shoulder back into place and Kennedy is all over him. Nice knees from Kennedy and now Kennedy gets Pico down. He has Pico’s back and he’s looking for a choke here.

Pico trying to remain composed here in a very bad position. One minute to go and this is all about survival for Aaron Pico. Nice shots from the back from Jeremy Kennedy. This has turned into an extremely one-sided round for Kennedy.

Pico is doing a good job defending with all he has. Twenty seconds left in the round. The round comes to a close and it’s all Jeremy Kennedy at Bellator 286.

The doctor calls the fight off after the round ends and Jeremy Kennedy gets the win.