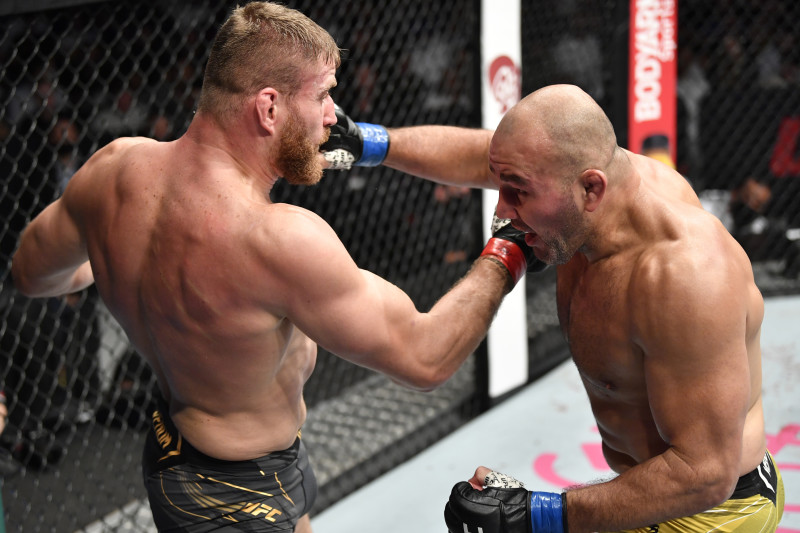 What an action-packed day of fights we were all able to bear witness to yesterday: UFC 267 was certainly one for the books.

Fight fans were even more primed than usual for a meaningful card after a mostly stagnant month of October in the UFC. From top to bottom, the fighters delivered on the biggest of stages to set up all types of massive implications moving forward in several divisions.

Age is just a number

A common narrative around the UFC light heavyweight title bout between Glover Teixeira (33-7 MMA, 16-5 UFC) and Jan Blachowicz (28-9 MMA, 11-6 UFC) this week was that this fight left a bit to be desired in terms of true championship talent. This was simply not ever the case, and especially is not now after witnessing what 42-year-old Glover Teixeira pulled off in Abu Dhabi at UFC 267.

Always a fan favorite, it was truly special to watch Teixeira achieve his lifelong dream in what was sure to be his last chance to do so. Make no mistake about it, though, this was not just a feel-good story; Glover Teixeira is still one of the best mixed martial artists on the planet. Despite both Teixeira and Blachowicz being slapped with the ‘really good, but not great’ label, Teixeira likely etched his name into the UFC Hall of Fame with his dazzling performance.

From the get-go, it was clear what Teixeira’s gameplan was: take down Jan Blachowicz and keep him down. It worked to perfection, with the UFC vet landing a beautiful takedown about 30 seconds into the fight and then laying on top of Blachowicz with his patented top-heavy pressure. Using the seldom applied (anymore) ‘can-opener’ guard-splitting technique bothered Blachowicz tremendously and may have done more damage (physically and mentally) than we’ll truly ever know.

The pivotal moment ended up being a crisp left hook that had way more pop on it than the one Blachowicz was able to return with, as the former champ never fully recovered from the shot. Clearly, Blachowicz was in his own head about potentially getting taken down again as he jumped when Teixeira feinted a level-change and the fight ended shortly after this sequence.

As we said here, Glover Teixeira should not have been a 2.5-to-1 underdog in this fight.

Is Teixeira talented enough, at 42, to take down a rising star in Jiri Prochazka in 2022? Who knows. The good thing is, none of us have to worry about that quite yet.

Petr Yan may be the best striker in the UFC

Sandhagen came out looking sharp with a brilliant game-plan that centered around constant movement and stance switching to establish distance control with his decided reach advantage. It worked, for a short time. However, Petr Yan is simply on another level than anyone else in the 135-pound division, and maybe even the entire UFC.

Yan was able to weather the early barrage and do what he has always done since he’s been in the UFC, which is break his opponents down over the course of 15-25 minutes. To his credit, Cory Sandhagen is as tough as it gets and had no business surviving some of the damage like he did and he should be around the top of this division for years to come.

He just won’t get to be champion anytime soon.

Khamzat Chimaev, folks — we may never see another one quite like him. Now four fights into his UFC career, Chimaev has managed to outstrike his opponents a whopping 254-to-1.

As ridiculous as that stat-line is, it almost doesn’t give true justice to just how dominant Khamzat Chimaev (10-0 MMA, 4-0 UFC) has been inside the Octagon. Once again, this fight was over before it even really began. Chimaev even found the time in between carrying Li Jingliang around like a child and bashing his face in to have a full-on conversation with UFC boss Dana White.

We’ve truly never seen anything like this and probably won’t again.

Islam Makhachev (21-1 MMA, 10-1 UFC) is here to stay as a legit 155-pound title contender, with another scary dispatching of a tough UFC lightweight foe. Makhachev has a real claim to fighting the loser, if not the winner, of next weekend’s clash between Justin Gaethje and Michael Chandler at MSG at UFC 268.

Alexander Volkov (34-9 MMA, 7-3 UFC) cruised to a (30-27X2, 29-28X1) decision win over Marcin Tybura (22-7 MMA, 9-6 UFC) but this was largely the most uneventful fight on the entire UFC 267 card. If there is anyone out there in the heavyweight division that is ready to challenge Francis Ngannou or Cyril Gane for the title, they weren’t in the Octagon yesterday.

Amanda Ribas (11-2 MMA, 5-1 UFC) got back on track with an impressive victory over fellow top-15 strawweight Virna Jandiroba (17-3 MMA, 3-3 UFC). After a shaky first round, Ribas mixed up her attacks and looked like she was on a different level than Jandiroba, overall. Amanda Ribas should be in line for a top-five contender next.

Featherweight Lerone Murphy (11-01 MMA, 3-01 UFC) easily had the most jaw-dropping finish of the day when he provided a blueprint for any UFC fighter struggling against a smothering grappler. Somehow, he was not awarded a UFC performance bonus, which speaks to how terrific of a card this ended up being.

Lastly, I was able to get back on track in the gambling unit department after a 3-1 day (with our only loss on a +400 underdog) and officially enter the green for the year.

I’ll look to keep that up next week on what truly is the biggest UFC event of 2021.