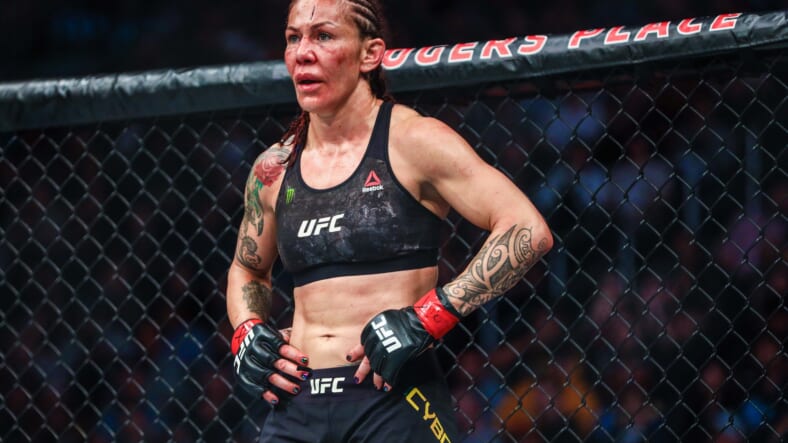 Tonight, Bellator MMA returned with some solid action. In the main event of the evening Cris Cyborg (22-2, 1 NC) was looking to defend her featherweight crown against Arlene Blencowe (13-7). Cyborg entered the cage as a sizable favorite to successfully defend her Bellator crown.

When the fight got underway, it was very apparent that Blencowe wasn’t intimidated by the Bellator champion. Both fighters exchanged leg kicks early. Halfway through the first round, Cyborg forced Blencowe against the fence and took her down.

Once on the ground, Cyborg was once again able to work her way to the mount position. Blencowe did a decent job at defending the strikes, but in doing so, she gave up her back. Cyborg flattened Blencowe out and locked in the rear naked choke for her first career submission victory.

There is no questioning the fact that Cris Cyborg is the best female fighter that Bellator has on the roster. She’s one of the greatest of all time and if it wasn’t for someone named Amanda Nunes, she would likely be considered the greatest to ever do it.

Arlene Blencowe was just out of her league at Bellator 249. I will give her credit in the fact that she didn’t back down and she didn’t appear afraid when she stepped into the cage. However, none of that mattered in the end as she was just another Cyborg victim.

After this victory, you start to really wonder what’s next in Bellator for Cris Cyborg. She could always have the rematch with Julia Budd. However, a fight with Cat Zingano down the line is likely for the Bellator champion. I don’t see her losing her title anytime soon.