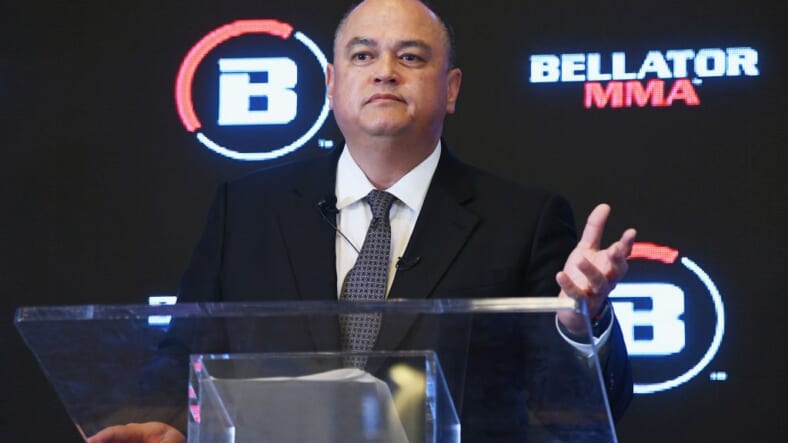 This weekend is shaping up to a weekend for the ages for Bellator. First and foremost, they have a massive event tonight which features the likes of Patricio Pitbull, AJ McKee, Aaron Pico, and more. Then, last night we learned that the promotion has made a massive signing (literally).

In speaking with MMA Fighting, Scott Coker revealed that Bellator has signed undefeated PFL heavyweight champion Ali Isaev (9-0) to a multi-fight contract. At this time, there is no word on when he will make his promotional debut, but he’s fixing to be in the title picture right away.

Isaev ran through the PFL competition back in 2019 to win the heavyweight title. He aimed to defend his title when PFL resumed business in 2021, but a number of different issues kept him out of competition. He didn’t compete in the 2021 or 2022 seasons.

He had a total of four fights that ended up getting cancelled. Regardless of his inactivity, his contract was set to expire at the conclusion of the 2022 season. With 2022’s final PFL card scheduled, Isaev was free to explore his options and he found a home with Bellator.

I absolutely love this move for the promotion. If we are being completely honest with ourselves, the heavyweight division isn’t the deepest in the world. Ryan Bader is currently the champion, but there isn’t a ton of elite competition for him right now.

You have Fedor looming, but he’s on the verge of retirement. Directly behind Bader in the rankings is guys like Valentin Moldavsky and Linton Vassell. Solid fighters, but not really needle movers if you ask me. With that in mind, I’m expecting Isaev to go right to the top.

Will he get an immediate title shot? Probably not. He hasn’t fought since 2019 so I could see Coker and Bellator giving him a tune-up fight. Remember, he’s also 38-years-old so we are not talking about a spring chicken here. Nevertheless, heavyweights age a little better than the smaller fighters.

I expect the promotion to give Isaev a top ten opponent and if he gets past that, he’ll go right into a title shot. Things definitely just got more interesting in the heavyweight division.