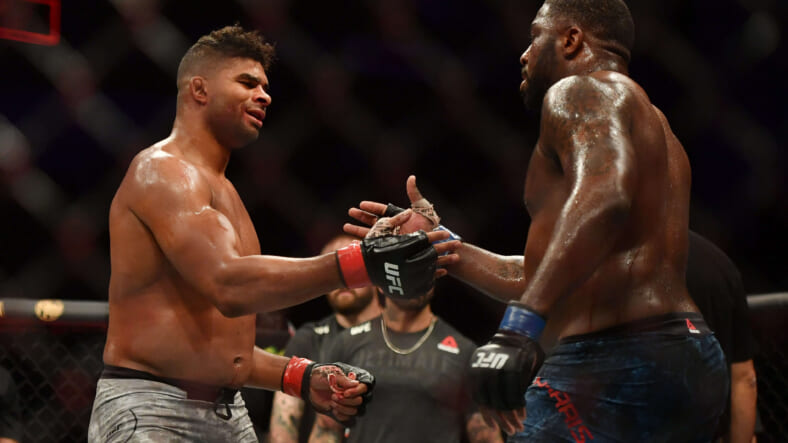 Bellator is looking to potentially add two of the greatest heavyweights in MMA history. Scott Coker said today that the promotion was looking at potentially signing Alistair Overeem (47-19, 1 NC) and Junior Dos Santos (21-9).

Both heavyweights were released by the UFC in early March. Releasing Dos Santos made sense for the UFC seeing as he’d lost four in a row, but many were caught off guard with their decision to release Overeem.

Nevertheless, both heavyweights have been on the open market for a month and Scott Coker is interested in both of them. Bellator‘s heavyweight division is really nothing to write home about.

Their heavyweight champion is a natural light heavyweight in Ryan Bader and there’s not a lot of star power there. The only real star in their heavyweight division is a 44 year old Fedor Emelianenko (39-6, 1 NC).

Coker said that Bellator isn’t interested in long term deals, but he’s definitely interested in those two. He said, “Weâ€™re not going to sign these guys to, like, a two-year, six-fight deal or build them up. Theyâ€™ve already proved themselves. They are legends of the sport already. But what I will say is we do have legends of the sport here. If we go down the road, and we think a Fedor opponent will work, Alistair and Fedor will be very interesting to me. Junior Dos Santos and Fedor will be very interesting to me.”

Will Bellator book one against Fedor?

Bellator has been looking at fights for Fedor Emelianenko. Fedor is looking for a final fight and the promotion wants to make it a big deal. They’ve even had preliminary discussions around having an event in Russia with a full crowd.

Fedor has faced many of the greats, but he hasn’t faced either Alistair Overeem nor Junior Dos Santos. Him and Overeem came close to fighting in Strikeforce, but the fight never materialized.

Now, Bellator can make it happen. Of course, there’s also the former UFC heavyweight champion in JDS. Both fights are interesting to Coker and I believe both would interest fans. Yes, none of them are in their primes anymore, but I think a lot of fans would still tune in.