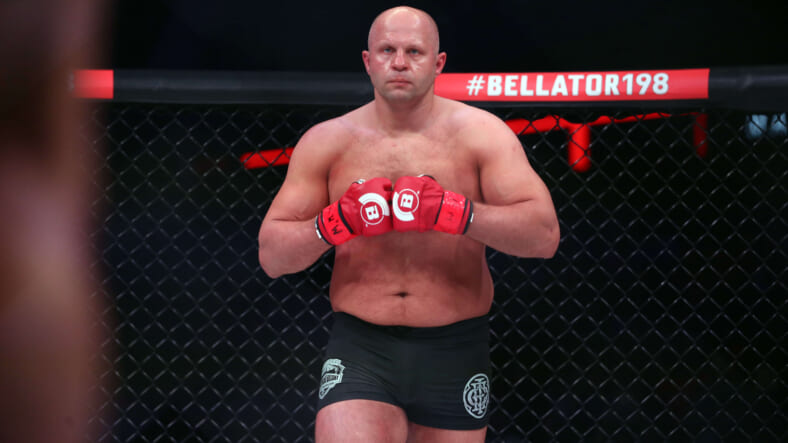 Bellator has been planning the return of one of the greatest fighters in MMA history. Fedor Emelianenko (39-6, 1 NC) has been gearing up for his return to the cage for the last year. The promotion announced that Fedor would be returning in October and he’d be headlining a card in his homeland of Russia.

Today, we learned who Fedor would be facing when he returns to the cage. Bellator announced that their second ranked heavyweight, Tim Jonson (15-7), would be the one facing off against Fedor in October. In all honesty, I’m a little surprised by the booking decision.

Johnson is one of the best heavyweights that Bellator has to offer. He just fought for the interim heavyweight title back at Bellator 261 at the end of June. Johnson fell short in his attempt to become the interim champion by losing a decision to Valentin Moldavsky.

That loss snapped a three-fight win streak for Johnson. During his previous winning streak, Johnson had finishes over Matt Mitrione and top Bellator prospect Tyrell Fortune. He also defeated Cheick Kongo in the promotion’s first trip to France last year.

Fedor Emelianenko returns against No.2?? ranked heavyweight @TBearTim in the #BellatorMoscow main event, Saturday, Oct. 23 at the VTB Arena ??

While it’s not been stated directly, this could be the final stand for Fedor in Bellator. The legendary heavyweight will be making the walk for the sixth time under the Bellator banner. So far in his career with the promotion, Fedor has gone 3-2.

The last time we saw Fedor was back in 2019 when he knocked out Rampage Jackson. Fedor will be 45 years old when he makes the walk in October. Given his age and the fact that Bellator booked this event to be in Russia, many are drawing the conclusion that he will be retiring after this one.

That said, if he defeats Johnson, he will likely be ranked near the top of Bellator’s heavyweight division. Regardless, I think this is the final fight for Fedor, but with The Last Emperor, you never really know.