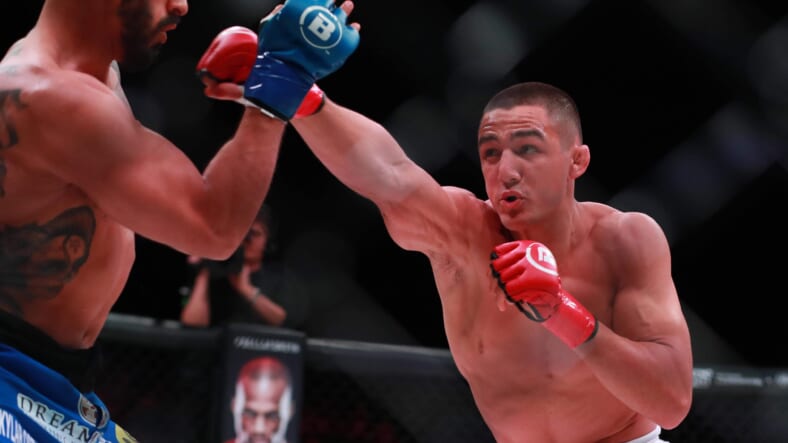 Bellator has finalized a big time matchup featuring two of their best featherweight prospects. ESPN’s Brett Okamoto was the first to report yesterday that the promotion had finalized a matchup between Aaron Pico (8-3) and Justin Gonzalez (12-0).

The matchup will take place at Bellator 271 on November 12th. While many will of course focus on Aaron Pico for this matchup, there needs to be a lot of attention on “The J-Train” Justin Gonzalez.

Gonzalez will be making his second appearance with Bellator since signing with the promotion earlier this year. After starting out his career a perfect 9-0, Gonzalez got a shot on Dana White’s Contender Series back in 2019.

Gonzalez was able to win by decision, but that wasn’t enough to get a contract with the UFC. From there, Gonzalez went to LFA where he defeated the previously unbeaten Jake Childers. That win was enough for Bellator to come calling.

He made his debut back in June when he took on Ty-wan Claxton. It was a close fight, but Gonzalez was able to pick up the split decision win at Bellator 260. Now, he’s getting a high profile fight against the dangerous Aaron Pico.

There weren’t many prospects that have ever started MMA with the level of hype Aaron Pico had. Maybe Brock Lesnar but that’s not entirely fair considering Lesnar’s status with the WWE prior to jumping into MMA.

Pico was looked at as a prodigy and Bellator signed him before he even turned 18 years old. He made his professional debut in 2017 and proceeded to lose in 24 seconds. From there, he won four straight before getting knocked out in back-to-back fights.

After those losses, Pico switched things up and went to Jackson-Wink for his training. Since making that transition, Pico has now won four straight fights again. With this current streak, not a single fight has gone the distance.

Pico is getting closer and closer to a shot at Bellator gold. This is going to be a very tough matchup for him and given the undefeated status of Gonzalez, the winner might only be a win or two away from a title shot. This is definitely one to watch at Bellator 271.