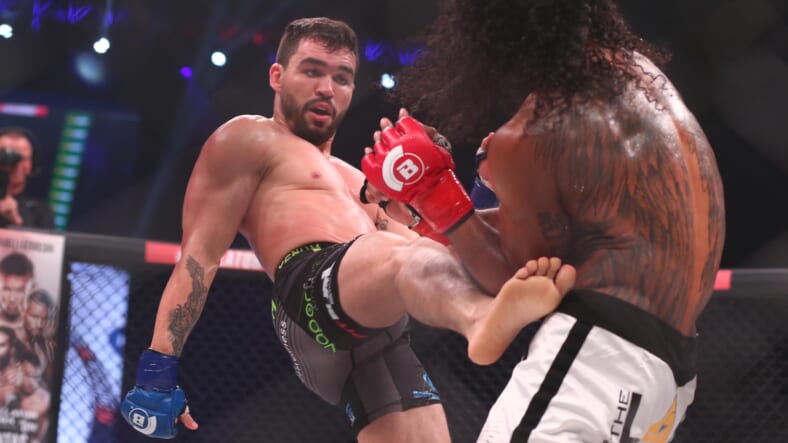 Tonight in the co-main event of Bellator 288, the lightweight title is on the line. Reigning champion Patricky Pitbull (24-10) will look for his first successful title defense as he takes on the undefeated sensation Usman Nurmagomedov (15-0).

Since making his debut in Bellator, Nurmagomedov has looked like a champion in the making. There was a ton of hype behind his signing and he has disappointed with his performances. So far, he’s gone a perfect 4-0 inside the Bellator cage.

However, it’s his last three performances that have really stood out. No opponent has gotten to the second round in the past three fights. Patricky Pitbull is going to have his hands full tonight.

That being said, Patricky Pitbull is a dangerous fighter. He has great skills on the ground and he has tremendous boxing that he showed off against Peter Queally when he won the lightweight title. He’s a massive betting underdog, but people shouldn’t sleep on him.

For Pitbull, he has to keep this fight in boxing range and he needs to avoid takedowns. If he can keep it a striking battle in tight, I think he can hit Usman. However, doing that is going to be a challenge. Nurmagomedov is great from the outside and we know how dominant he is on the ground.

While the odds are heavy in one direction, I think it’s warranted. I think Usman Nurmagomedov walks away the Bellator lightweight champion tonight.

Prediction: Usman Nurmagomedov by TKO – Round 2