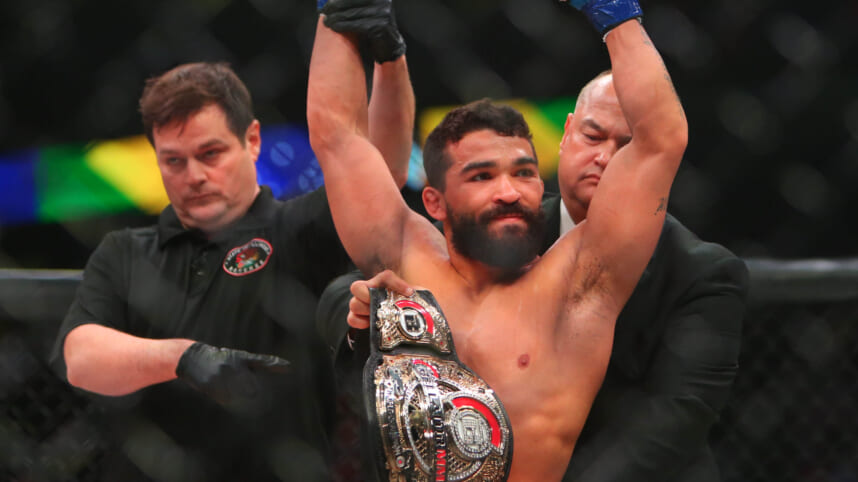 In headliner of Bellator 286, the most decorated champion in the promotion’s history returned. Featherweight champion Patricio Pitbull (33-5) took on one of his toughest challenges to date in Adam Borics (18-1).

Borics entered the cage riding a four-fight winning streak. The only man to defeat him inside the cage was Darrion Caldwell who was able to submit Borics back in 2020. However, he’s been perfect since.

Patricio Pitbull was shocked by AJ McKee back in 2021. The long reigning featherweight champion was stopped in the first round and it looked like a new king was going to reign over Bellator. However, Pitbull came back earlier this year and defeated McKee showing he’s still the top dog. He was once again looking to prove that this evening.

The Bellator 286 headliner kicked off with a touch of the gloves. Pitbull holds the center to start the fight and both men immediately start gauging the right. Nice left hand lands for Borics and he follows it with a nice jab. Borics steps in and lands a nice 1-2.

Hard to tell if he was hurt or if it was a slip. Pitbull gets on his back but Borics is able to separate. Borics forces a clinch and goes for a takedown, but Pitbull reverses and takes Borics down. Top position for the champion here.

Not much lands as Pitbull just held control. The referee stands them up after a bit and they are back to striking. Borics comes forward but it’s Pitbull that lands the better shots. Another nice counter right lands for Pitbull as Borics advances again. First round in the books and it’s 1-0 for the Bellator featherweight champion.

Entering the second at Bellator 286 and Borics really needs to try and keep this fight at distance. Pitbull takes the center to start the second round. Both men attempt body kicks to start the striking. Big low kick from Pitbull after a nice left from Borics lands.

Good jab from Borics. Another low kick lands for Pitbull. Borics comes forward and eats two big shots for his trouble. Borics looking to up the volume as it appears he’s cut over his right eye. Good combination from Pitbull and the champion is frustrating the challenger here.

A right over the top appears to briefly hurt Borics but Pitbull stays patient. Good body kick lands for Borics and then a leg kick. Beautiful counter down the middle from Pitbull.

Both men trade 1-2s down the center. Lead left for Borics. Double jab for Borics. Low kick for Borics who is definitely scoring more points here in the second. 1-2 comes through for Borics. Leg kick from Borics is caught and Pitbull lands a right straight. He holds the leg and takes Borics down.

Pitbull settles into the guard and lands a couple of nice shots. The round comes to a close and it was closer, but the Bellator featherweight champion should be up 2-0 on the cards.

Entering the third and Borics really needs to build off some of the success he saw in the second. They touch gloves and here we go with round three. Borics throws a jab and a lead left hook behind it. 1-2 attempt from Borics who is upping the urgency here.

Right hand attempt from Borics. So far, nothing big is landing but you can tell Borics is feeling some urgency. Flying knee from Borics, but Pitbull catches him and takes him right down. The champion settles into half guard but immediately jumps into mount.

Pitbull boxing the ears of Borics here. Borics tries to escape, but Pitbull’s top pressure is too good here. Pitbull softening Borics up here from the mount. Slicing elbow from the champion and Borics is getting very frustrated from the bottom.

Another slicing elbow from Pitbull and Borics rolls. Pitbull gets his back and Borics stands to his feet. The backpack position here as Pitbull is holding onto the back mount. Pitbull abandons the position and then drags Borics right back down.

The champion jumps back on the back and the challenger immediately stands back up. Borics reverses the position and now he’s controlling Pitbull against the fence. The round comes to a close and it’s likely 3-0 at Bellator 286.

Entering the fourth at Bellator 286 and Adam Borics really needs to get going. This round stars with Borics holding the center. Pitbull is the one circling on the outside staying light on his feet. Borics throwing with decent volume to start the final frame but nothing major landing.

Pitbull with a brutal calf kick and now he takes the center back. Borics continues trying to throw shots but Pitbull isn’t showing him much respect. Nice left from Borics lands. He’s definitely throwing with more volume, but the champion doesn’t appear threatened at all.

Nice jab from Borics. Right over the top lands for Pitbull and he follows with a kick. Big right hand lands for Pitbull. Both men trade jabs in the center and now Borics lands a leg kick. Pitbull answers with a big leg kick of his own.

Left hook from Borics and then he follows it with a 1-2. However, none of those shots had much on them. Borics is doing well in this round just nothing has a lot of pop on it. Right hand from Pitbull snaps the head of Borics. Borics tries for a takedown but the round ends. Borics is going to need a finish.

Entering the final round and it’s starting to look like it’s going to take a miracle for Borics at Bellator 286. They touch gloves and here we go. Low kick from Pitbull starts the striking. Borics is holding the center and he’s plotting forward.

Flying knee from the challenger but once again, it doesn’t work and Pitbull gets Borics’ back. Back into the backpack position and Borics is just carrying Pitbull around the cage. The crowd is becoming very restless with two minutes left.

Borics spins and now he’s got the controlling position. Borics lifts and he takes Patricio Pitbull down. Borics is into half guard with one minute to work. The champion is doing a good job of controlling posture here. Pitbull looking to scramble and he gets back to his feet.

However, Borics is still on him. Pitbull trying to lock up a kimura and he actually uses it to get the top position. The round comes to a close and Patricio Pitbull should retain with ease at Bellator 286.