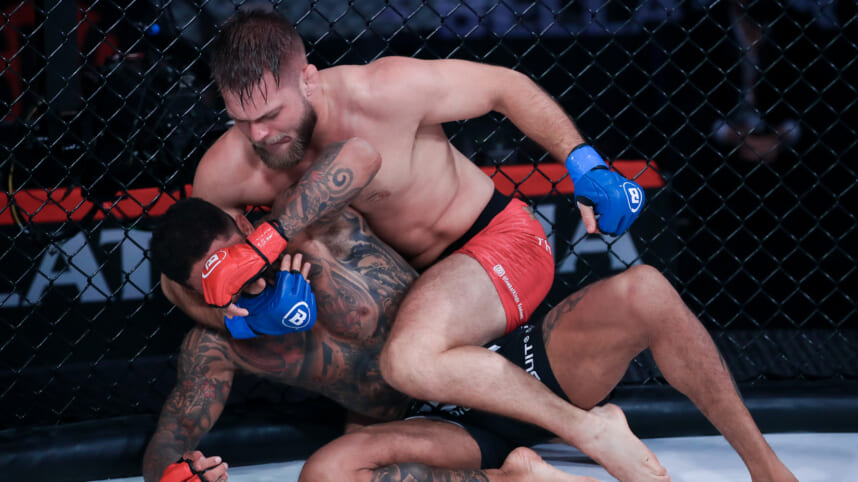 Tomorrow on the main card of Bellator 285 from Dublin, we are going to see a banger in the featherweight division. Top contenders will battle it out as Mads Burnell (16-4) takes on SBG’s Pedro Carvalho (12-6).

Carvalho made his Bellator debut back in 2018 and he started out scorching hot. He won his first four fights and that ultimately led to a featherweight title shot against Patricio Pitbull. Unfortunately for Carvalho, that fight didn’t go his way and it’s been a struggle since.

Pitbull knocked him out in the first round and starting with that fight, he’s just 1-3 in his last four fights. The last time we saw him was Bellator 280 back in May where he lost a split decision to Piotr Niedzielski. He’s going to be looking to get back on track tomorrow afternoon.

Standing in his way is Mads Burnell. Without a doubt, Mads Burnell is one of the very best featherweights that Bellator has to offer. A few years ago, he lost in the UFC to Arnold Allen. After that loss, Burnell won seven straight including his first three wins in Bellator.

In his last bout, he took on Adam Borics in a title eliminator. It was a tough fight that Burnell lost by decision. He’s hoping to get back on track in order to remain squarely in the title picture at 145.

When it comes to this fight, it’s easy to see why Burnell is the huge favorite. He has a massive wrestling advantage and you might even give him the striking advantage. Now, I really do like the way Carvalho flows with his striking. He definitely shows off that he’s from SBG.

For Carvalho, he needs to keep this fight at range. He has good distance control and he can give Burnell some problems if he controls the range. However, I really have a hard time believing that he will. I think this is Burnell’s fight to lose.

I see Burnell getting on the inside and either taking Carvalho down or hurting him on the feet. Once the fight is on the ground, I think Burnell will end up finding a submission. I think he gets this done in the second round.

Prediction: Mads Burnell by Submission – Round 2