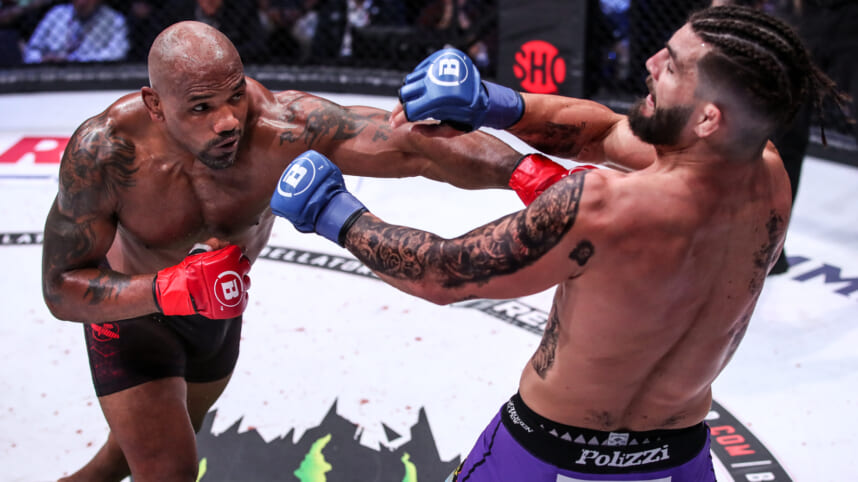 Tomorrow afternoon in the co-main of Bellator 285, we are going to see a light heavyweight battle that promises fireworks. Former UFC title challenger Yoel “The Soldier of God” Romero (14-6) makes his third appearance with the promotion as he takes on veteran Melvin Manhoef (32-15-1).

This is a matchup of two of the oldest fighters on the roster. Romero will make the walk at 45 while Manhoef will enter the cage at 46. Manhoef also announced that his fight tomorrow morning will be the final one of his career.

The last time we saw him, he was destroyed by Corey Anderson. That loss snapped a two-fight winning streak. Manhoef has been all over the world in his fighting career. He’s fought the likes of Gegard Mousasi, Robbie Lawler, Mark Hunt, and Tim Kennedy. He’s been a fixture for a long time and after tomorrow, he will finally hang up the gloves.

The man tasked with spoiling his retirement party is Yoel Romero. Romero had a big win in his last bout which snapped a four-fight losing streak. The last time we saw him was at Bellator 280 in May where he knocked out Alex Polizzi. Romero is hoping for a similar result tomorrow.

There is only one path to victory for Melvin Manhoef tomorrow and that’s the route of a knockout. He has the striking and the power to knock out just about anyone, but can he knock out The Soldier of God?

I’m skeptical. While we never see it, a big advantage for Romero is his wrestling. Romero was an Olympic Silver Medalist in wrestling. He’s so explosive and strong that he could take down Manhoef at will if he chooses to do so.

I’m convinced that if he wanted to, Romero could take down Manhoef and stop him in the first round with ground strikes. However, that’s not Romero’s game. We all know that he loves to stand and trade and I expect him to do that.

While Manhoef is much more decorated as a striker, he doesn’t have the chin Romero does. I expect some fireworks with this matchup and those fireworks will cause one man to fall. That man will not be Yoel Romero who will be picking up his second Bellator win tomorrow afternoon.

Prediction: Yoel Romero by TKO – Round 2