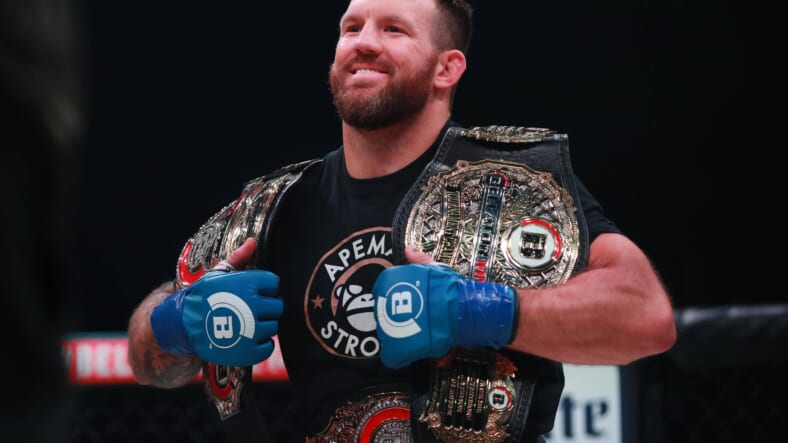 Saturday night in the co-main event of Bellator 268, we have a semifinal matchup in the Light Heavyweight Grand Prix. Former light heavyweight and current heavyweight champion Ryan Bader (28-6) takes on Corey Anderson (15-5).

Ryan Bader lost the light heavyweight title back at Bellator 244 when he was knocked out by Vadim Nemkov. It was Bader’s first fight and defense of his title since 2017 and he didn’t look good. After losing the title, Bader had a decision to make.

He could either defend the heavyweight title or join the Grand Prix. Ultimately, Bader decided to join the Grand Prix and try and win his second title back. In the opening round, Bader was able to defeat Lyoto Machida by decision.

Standing across from Bader on Saturday night is Corey Anderson. Entering 2020, Corey Anderson looked like he was going to get a shot at the UFC light heavyweight title. He had a title eliminator against Jan Blachowicz and he lost by knockout.

After the fight, he actually got out of his UFC contract and signed with Bellator which shocked the fight world. Anderson made his debut with Bellator in November and won by TKO. He opened the Grand Prix with another TKO win to start out 2-0 with his new promotion.

This is such a good fight and one that I truly wish was five rounds. These are two of the better light heavyweights in the world and both contain a very similar skillset which will make this Bellator 268 matchup so intriguing.

Both men possess really good wrestling and they both have striking to be weary of. We have seen both Bader and Anderson put opponents away on the feet. In terms of using their wrestling, I would say that we’ve seen Anderson be more effective there, but Bader has better credentials overall.

I’ve really gone back and forth on this matchup at Bellator 268 because I think it comes down to the striking. I can picture Bader landing a bomb that puts Anderson out. However, I don’t ultimately think that’s going to happen.

I just have a feeling that this is Corey Anderson’s time. He will be able to do more on the feet and his wrestling will negate any wrestling from Bader. It might not be the most exciting affair, but I expect a Corey Anderson decision win at Bellator 268.