AJ McKee wins wild one against Spike Carlyle at Bellator 286 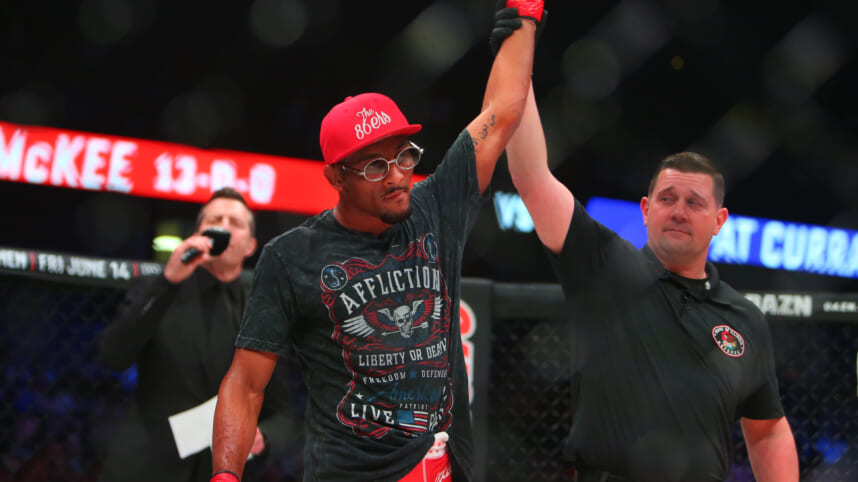 Tonight in the co-main event of Bellator 286, the former featherweight champion moved up to lightweight for the first time. AJ McKee (18-1) was looking to bounce back from his first professional loss as he took on the entertaining Spike Carlyle (14-3).

Back in July of 2021, AJ McKee ran through Patricio Pitbull to become the Bellator featherweight champion. The two men immediately ran things back earlier this year. This time, McKee was a step behind and lost by decision.

It was a very humbling moment for the former champion. Featherweight was getting harder and harder for McKee to make so he decided to move up to lightweight.

Spike Carlyle entered the cage riding a five-fight winning streak after he was cut from the UFC. One of those fights came in Bellator. More impressively about the winning streak is that Carlyle has finished all five opponents.

The Bellator 286 co-main event kicked off with Spike Carlyle sprinting at AJ McKee with a flying attack. Both men are just slinging massive shots. This is wild as both men are connecting with haymakers. Huge shot from McKee and Carlyle looks rocked.

Takedown from Carlyle but McKee gets the better position during the scramble. Another scramble and now it’s Carlyle on top. Huge right hands from the top from Carlyle. The pace slows with Carlyle settling into the guard. McKee still active off his back, but things have slowed.

Big shots from Carlyle and he moves into half guard. I cannot get over the start of this fight. Halfway through the first and Carlyle is slowly trying to advance. Nice elbow from the bottom lands for McKee. Elbow answer from Carlyle who continues to hold the top position.

Nice control from Carlyle. Beautiful reversal from AJ McKee who is in top position now. Carlyle explodes and now he ends up on top. Once again another scramble and McKee gets the back of Carlyle. Carlyle continues to try and spin but McKee is glued to his back. What a round.

Thirty seconds left and McKee is looking for the choke. Carlyle turns and now he gets the top position. The round ends and my goodness what a first round at Bellator 286.

McKee reverses the position and now he’s looking for the takedown. McKee dives on the legs and he gets Carlyle down. Carlyle spins but McKee has his back. McKee is trying to get his arms free to attack submissions but Carlyle is doing a good job of holding McKee’s hands.

Carlyle tries to engage in a clinch and McKee looks for a choke. Less than two minutes left in the round. McKee lands a couple of really nice knees to the body. He chains that into a submission attempt. However, Carlyle scrambles out of it and now he gets McKee in his guard.

The round comes to a close and it’s a dominant round from the former Bellator champion.

Entering the final round and it could be 1-1 at Bellator 286. Carlyle tries coming forward with a wild right hand that misses the mark. Carlyle is exhausted. Big body kick from McKee. Nice combination from McKee and he chains that into a takedown.

Big elbows from McKee and Carlyle is split open. North-South position and McKee lands a nice elbow to the body. Carlyle forces a scramble and McKee now goes for a guillotine. Carlyle slips out and gets back to his feet. However, he’s taken right back down by AJ McKee.

McKee spins to the back of Carlyle. Big shots from McKee and Carlyle is leaking all over the place. Carlyle escapes again briefly before getting taken right back down by McKee. Carlyle is really showing off his toughness tonight.

McKee locks up a guillotine and he sits back on it. However, Carlyle slips his head out and now he’s on top. McKee forces a scramble but it’s Carlyle that ends up briefly getting the back of AJ McKee. McKee spins and they scramble again. McKee ends up on top. The final seconds tick away and McKee should get the nod at Bellator 286.