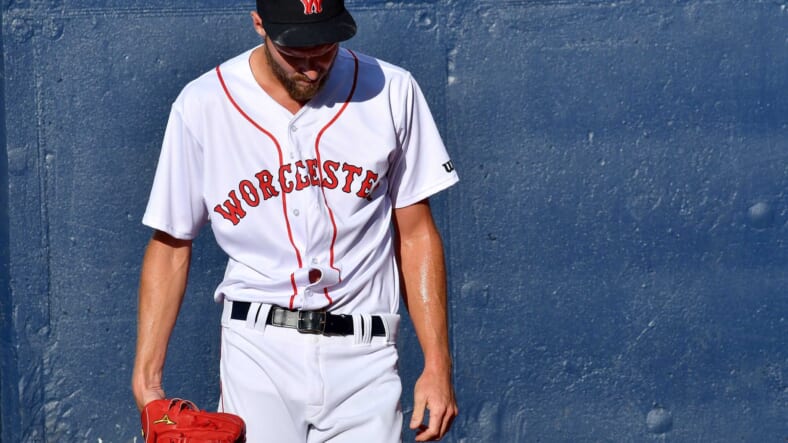 Boston Red Sox starting pitcher Chris Sale is in the middle of a rehab assignment with their Triple-A minor-league affiliate, the Worcester Red Sox.

Against Scranton/Wilkes-Barre, the Yankees Triple-A affiliate on Wednesday night, Sale struck out five batters and walked five batters, but with the bases loaded, he walked in a run and was removed from the game. Shortly after, he was seen throwing a temper tantrum in the clubhouse, ripping a television off the wall.

VIDEO: #RedSox pitcher Chris Sale upset after giving up a bases loaded walk & being taken out after 3 & 2/3 innings in a rehab start for the @WooSox (?: @bri4homes) @NBC10Boston @NECN pic.twitter.com/1j1ga5kJaT

Sale commented after the game regarding the incident, indicating it was a result of frustration.

“It was all just frustration. I’ve gone months without walking five guys… Nothing’s wrong, I just have some things that I have to clean up,” Sale said, via Boston 25 News.

After missing the entire 2020 season due to Tommy John surgery and pitching just nine games in 2021, Sale went on to fracture his rib cage in February. Working his way back has been a tumultuous situation, and struggling at the Triple-A level certainly isn’t what he anticipated.

However, the Red Sox are hoping Sale can make a full recovery and leave a positive impact on their major league team this season at 33 years old. The last truly dominant season Sale enjoyed was back in 2018 when he posted a 2.11 ERA over 158 innings.