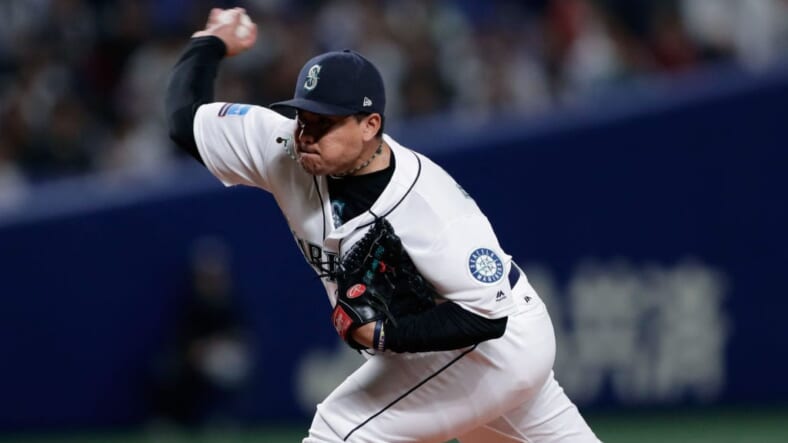 NAGOYA, JAPAN – NOVEMBER 15: Pitcher Erasmo Ramirez #31 of the Seattle Mariners throws in the top of 4th inning during the game six between Japan and MLB All Stars at Nagoya Dome on November 15, 2018 in Nagoya, Aichi, Japan. (Photo by Kiyoshi Ota/Getty Images)

In addition, the Mets re-signed right-hander Erasmo Ramirez, who pitched the original spring training with them.

With the two players in the fold, the New York Mets have now made four additions to the 60-man player pool since the initial roster came to light on Sunday evening, the other ones being Strickland and outfielder Ryan Cordell, who was released at some point in the last few months but is now back with the club.

Beckham, once a top prospect who failed to live up to the hype, is now 33 years old. He was let go by the San Diego Padres back in March after failing to make a good impression. He hit .215/.271/.372 in his 340 plate appearances with the Tigers last season. That’s why expectations regarding Beckham should not be high, but of course, since it is a low-risk move, the Mets are hoping he can at least provide depth.

The Mets bring back Ramirez

With Ramirez, the Mets bring back a useful right-handed arm that can serve a variety of roles out of the bullpen, from a long man to a middle reliever or even a spot starter, if needed. He was with the team during the abbreviated spring training, but he spent the majority of the 2019 season in Triple-A.

The New York Mets have some of the best young stars in the game, including Jeff McNeil, Pete Alonso and Michael Conforto. However, when looking for depth, they are seeking the free agent market and made a couple of interesting signings.