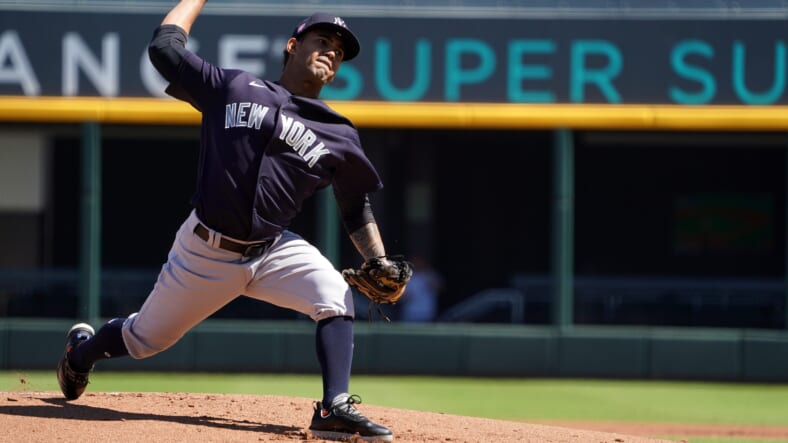 We live in 2020, and it seems like the pace with which we do and want things done is accelerating by the day. The world, it seems, has run out of patience. The same happens with MLB teams, prospects, and overall expectations: we want our young studs to be major league stars from day one, but that’s not always the case. Player development is not linear, and it’s unrealistic to put high expectations in a hurler that was playing in Class A-Advanced just a few months ago. That’s the case of New York Yankees‘ prospect Deivi Garcia.

Garcia is still 20 years old. He has a smallish build and needs to prove that he can shoulder a big workload in the major leagues. He has been injured before, and the Yankees sure don’t want to mess with his health.

The Yankees’ prospect only has 40 unsuccessful innings in Triple-A

But, more importantly, let’s see him dominate in Triple-A before putting unfair expectations in him. Last season, he pitched 40 innings there after his stellar run in the previously mentioned levels.

In those 40 frames, Garcia struggled with command (4.50 BB/9) and home runs (1.80 per each nine innings.) The latter can be attributed to the infamous “juiced ball” used in Triple-A, but that’s not the only reason. He needs to improve his command and he could refine all his arsenal before reaching the bigs for good. A 5.40 ERA in Triple-A, with a 5.77 FIP, ain’t gonna cut it.

Why rush him? After all, the New York Yankees will likely have James Paxton back before the season starts. They have Gerrit Cole, Masahiro Tanaka, Jordan Montgomery, J.A. Happ and other prospects that are indeed ready for the bigs, such as Mike King and Jonathan Loaisiga. They will have Domingo German back, eventually. The Yankees have depth, so they would be better off letting Garcia learn his trick in Triple-A for now. Let’s see him prove he belongs with the big boys.