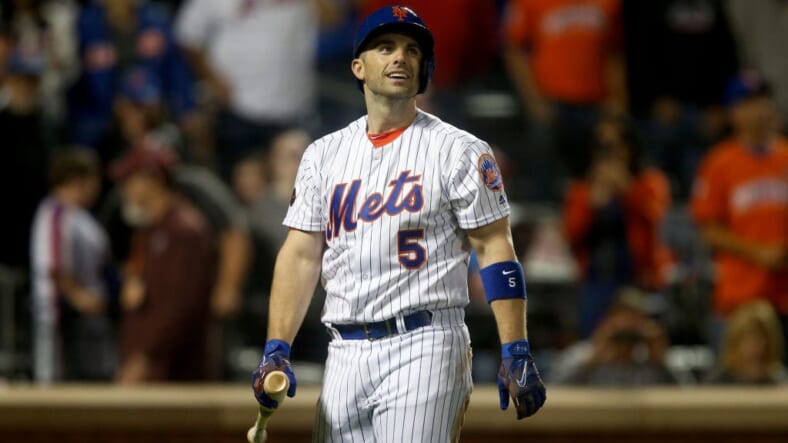 NEW YORK, NY – SEPTEMBER 29: David Wright #5 of the New York Mets walks back to the dugout after fouling out during the fourth inning against the Miami Marlins at Citi Field on September 29, 2018 in the Flushing neighborhood of the Queens borough of New York City. (Photo by Jim McIsaac/Getty Images)

David Wright, the New York Mets‘ legend and former captain, recently said that he hates Wrigley Field, home of the Chicago Cubs from his playing days. However, wait until you hear the details before you go crazy and call him names in social media.

Wright, arguably the best player the New York Mets have produced in recent past, made the remarks during an episode of The Cookie Club while chatting with J.D. Davis, Dom Smith and Steve Gelbs.

“My favorite city probably in the summertime would be Chicago, but I hate — and this is probably against all sorts of baseball religion — Wrigley Field,” he said.

Wright went on to talk about other subjects but Gelbs later went back to the story to get clarification, according to SNY. After all, Wrigley Field is the second oldest park in baseball and represents the history of the game. Many stars have played there and the most romantic fans would probably be offended by Wright’s sentence. But let’s calm down first.

“I tend to not like day games, so that hurts, and I’m very routine-oriented, and at the time, the cage was in like right-center field and you could only get it for like an hour so you’re trying to split time with the rest of the offensive guys, trying to get your routine in.”

Wright concluded: “So basically, it was the facilities, I’d say. The atmosphere is great.”

There you go, Cubs fans. This New York Mets’ legend doesn’t hate you or disrespected your home stadium. There is no need to overreact.