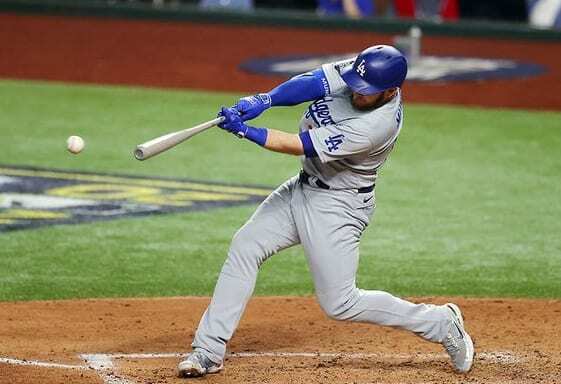 Last night’s MLB World Series game was not a good night for Tampa Bay Ray’s Tyler Glasnow; the first batter he faced, Mookie Betts doubled, and then Corey Seager singled, driving in Betts for the 1-0 leas in the first inning. Seager stole third, Cody Bellinger singled, and it was 2-0. Although Glasnow allowed the Dodger lead in the first, it wasn’t an easy night for either pitcher.

At the top of the 2nd inning, the Dodger’s Joc Pedersen homered into the left-field bullpen for the 3-0 lead. With Clayton Kershaw on the mound for the Dodgers and one on, Yandy Diaz had a long double to far-right field. Ray’s star Randy Arozarena singled, driving a run, drawing the Rays to one run behind the Dodgers.

In the 4th, with no outs and men on the corners and the Dodgers 3-2 lead, Kevin Kiermaier at the plate, Manuel Margot, took off for home and was called out for the final out of the inning. At the top of the fifth inning, Max Muncy hit his third home run of the season far into the first deck of left field for the 4-2 Dodger lead after Tyler Glasnow put way eight Rays in a row. At the bottom of the frame, Clayton Kershaw still in there, struck out two Rays and got a fly out to finish off the inning.

The rest of the game remained scoreless for both teams, with the final score of 4-2 Dodgers. In the game, Randy Arozarena’s hit was his 27th hit of the postseason and all-time record in postseason hitting. Kershaw got the win, and Tyler Glasnow the loss.

Today will be a day off for both teams as the home field advantage switches back to the Dodgers. This game six coming on Tuesday night will be an elimination game for the Tampa Bay Rays. The probable pitchers will be Blake Snell for the Rays and Tony Gonsolin for the Dodgers. The game will be just aft 8 pm at Globe Life Field in Arlington, Texas.