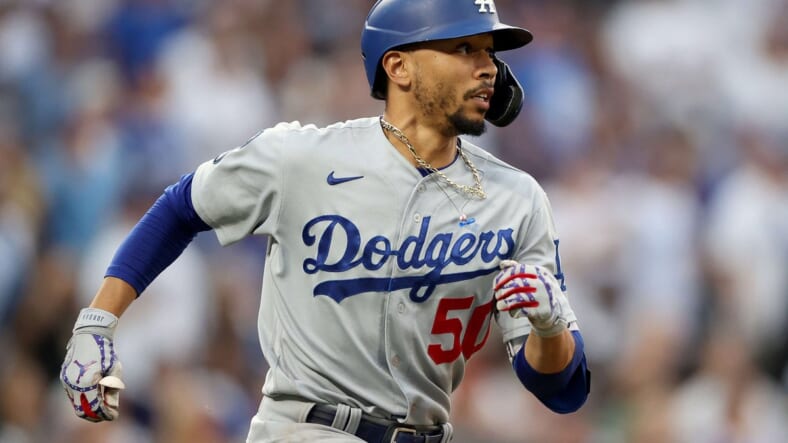 The New York Yankees postseason ended with the loss in the wild card game against the Boston Red Sox. The Red Sox have conquered the Tampa Bay Rays in the ALDS and will face the Houston Astros for the second time in five years in the ALCS after the Astros beat the Chicago White Sox 10-1 earlier today. The Atlanta Braves were up two games to one and reached the NLCS when they beat the Milwaukee Brewers today in Atlanta 5-4. The only Championship yet to be decided is the Dodgers Giants NLDS at Los Angeles. If the Dodgers could win, they would tie the Giants and force a game five.

When the Dodgers won the wild card from the St. Louis Cardinals, they created history by playing in the divisional series against the San Francisco Giants for the first time since they were the New York Giants in 1889. That year the Giants won the World Series by one game over the Boston Beaneaters.

Friday was Game one against these two western rivals. The Giants scored two runs off the Dodgerâ€™s starting pitcher Walker Buehler and the game was over; the Dodgers didnâ€™t know it at the time, but they remained scoreless off of the Giants pitching; the Giants shut them out 4-0.

Game two was Saturday at Oracle Park in San Francisco, with an altogether different outcome. The Lost Angeles Dodgers piled on nine runs to the Giants two. Thus, tying up the five-game series at one apiece.

Game three Last night at Dodgerâ€™s Stadium, Game three was a pitcherâ€™s duel with only one run scored on the night; it belonged to the Los Angeles Dodgers, giving them the two-game lead in the series.

Tonight was Game four Anthony DeSclafani was on the mound for the Giants and Walter Buehler for the Dodgers. The Dodgers got on board first with a Trey Turner RBI.Â  In the second, the Giants remained scoreless. At the bottom, the Dodgers put two on. With men on the corners, Chris Taylor doubled, putting the Dodgers up by two runs. That ended the night for DeSclafani. The Giants Alverez replaced him and shut down the Dodgers. Los Angeles 2 San Francisco 0.

In the third, Buehler put down the Giants in order. At the bottom, Kevin Castro took over for the Giants, and with two on and one out. He was replaced by Jarlin Garcia, who allowed the second walk in the inning, loading the bases. Chris Taylor flew out to end the inning, stranding three Dodgers.Â  At the top of the fourth, Buehler put down the Giants 1-2-3. At the bottom, one on Mookie Betts homered to right field, giving the Dodgers a four-run lead and ending Garciaâ€™s night. Dodgers 4 Giants 0.

In the top of the fifth with two on Buehlerâ€™s (on three days rest) night was over replaced by Joe Kelly. Tommy La Stella, with two on and one out, singled, loading the bases with Giants. Darin Ruf ground out, scoring Evan Longoria. But Kelly got out of the jam, only allowing the one run. In the bottom, the Dodgers Gavin Lux walked, Cody Bellinger, singled moving Lux to third, Chris Taylor reached on a fielders choice with Lux getting caught in a run down. New pitcher Tyler Rogers faced Steven Sousa, who walked. Mookie Betts flew out as Bellinger scored. Corey Seager flew out to end a very long fifth inning. Dodgers 5 Giants 1.

At the sixth with 53,000 on hand at Dodgers Stadium, Busdar Graterol on the mound for the Dodgers put down the Giants in the sixth. Zack Littell allowed two runners to get out of the inning with the Dodgers scoreless. In the seventh, the Giants failed to score, as did the Dodgers. Dodgers 5 Giants 1.

Brandon Crawford led off with a double moved to third on a Buster Posey ground out in the eighth inning. Chris Byant gound out with Crawford scoring. That was it, but the Giants tacked on a run. At the bottom, Seager led off with a single. Then, Will Smith hit a two-run homer to the left-field stands to put the Dodgers up 7-2. In the top of the ninth with the last licks on the line for the Giants, they went down in order for the Dodgers win, forcing a game five on Thursday back in San Francisco.