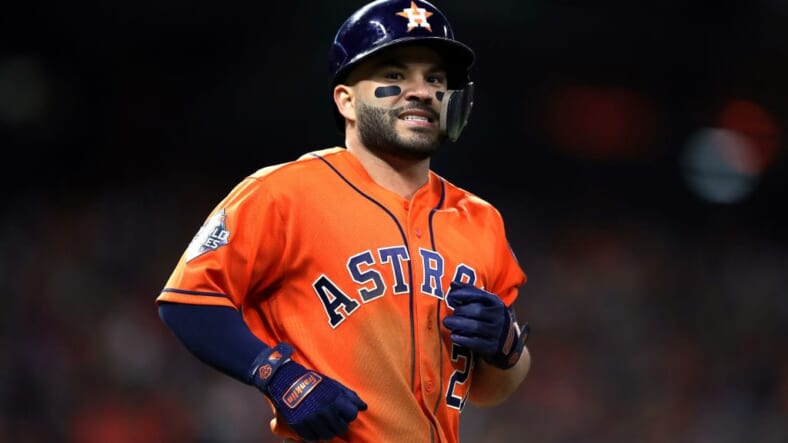 HOUSTON, TEXAS - OCTOBER 30: Jose Altuve #27 of the Houston Astros reacts after he lines out against the Washington Nationals during the fourth inning in Game Seven of the 2019 World Series at Minute Maid Park on October 30, 2019 in Houston, Texas. (Photo by Elsa/Getty Images)

The New York Yankees postseason ended with the loss in the wild card game against the Boston Red Sox. The Red Sox have conquered the Tampa Bay Rays in the ALDS and will face the winner of today’s Astros White Sox game. Going into the game the Houston Astros are ahead in the series two games to one. A win today would send the Astros to the ALCS. The Astros won the game 10-1, dominating their rivals from the north.

Here is how the Houston Astros won their chance to face the Boston Red Sox in the American League Championship Series.

In Game one, Lance McCullers Jr. bested the White Sox Lance Lynn. The Astros got a few small ball runs, and then Michael Brantly got a two-run dinger helping the cause. Yordan Alverez sealed the deal with a solo shot for the Astro’s sixth run in the 6-1 win.

Friday night’s Game two was more of a contest as the White Sox scored four runs to the Astros 9. The White Sox struck first in the first inning, but the Astros got it back in the second. Tim Anderson of the Sox tied a baseball record getting 12 hits in his first five postseason games. However, the tide turned for the Sox when the Astros Yuli Guirrel got a two-run homer. Two-run homers followed that by both Carlos Correa and Kyle Tucker.

Game three: With their backs against the wall, the White Sox faced elimination, but they rose to the occasion and won 12-6. Dylan Cease allowed the Astros to score three runs before being taken out of the game. Kopech replaced him, giving up another three runs. But the combo of Tepera, Bummer, Kimbrel, and Hendriks kept the Astros hitless from the fourth inning on. Meanwhile, the White got to work and tacked on six additional runs off Astro’s pitching.

In the bottom of the fourth, Leury Garcia hit a three-run homer to left, giving the White Sox the lead in the game. The eighth inning sealed the deal. Andrew Vaughn doubled driving in a run. Garcia, after already hitting a three-run homer, drove in another run in the eighth. With men on the corners, Tim Anderson would double driving in Vaughn as the game’s final run. Sox 12 Astros 6, forcing a game four.

Game four: Today, the pitchers were Lance McCullers Jr. for the Astros and Carlos Rodon for the White Sox. Jake Meyers left the game in the second inning after crashing into the wall robbing the Sox of a homer. But the Chicago White Sox got on the board first when Gavin Sheets homered off McCullers Jr. in the bottom of the second inning. But that lead would not last long as the Astros came roaring back in the third and fourth.

In the third, Carlos Correa got a two-run double to left field at Guarantee Park. In the fourth, Alex Bregman would get his two-run double into the centerfield gap scoring Martin Maldonado and Jose Altuve; Bregman scored, extending the Astro lead to 5-1. With Tepera, the fourth Sox pitcher on the mound, he held down the Astros. The fifth inning was scoreless for both teams.

The Astros, in the sixth inning, put a McCormick on second, ending Tepera’s day. Against new Sox pitcher Aaron Bummer, Brantley doubled, scoring McCormick driving in another Astros run. In the bottom, the White Sox were scoreless. Astros 6 White Sox 1.

The seventh with Bummer still in for the Sox silenced the Astros. The White Sox didn’t do any better. In the eighth, Altuve scared the Sox with a double on a Sox throwing error to first. He then stole third. Brantley singled, scoring Altuve for another Astros run. Brantley stole second. Alverez walked, but Correa ground out, but the Astros tacked on another run. The eight ended the Astros 7 White Sox 1.

In the ninth, the Houston Astros tacked on another three runs including a Jose Altuve homer that the White Sox could not recover from. The final score was the Astros 10 and the White Sox 1. The Astros won their ticket to the ALCS for the fifth time in the last five years.

The Boston Red Sox will face the Houston Astros in the AL Championship Series on Friday, October 15th.