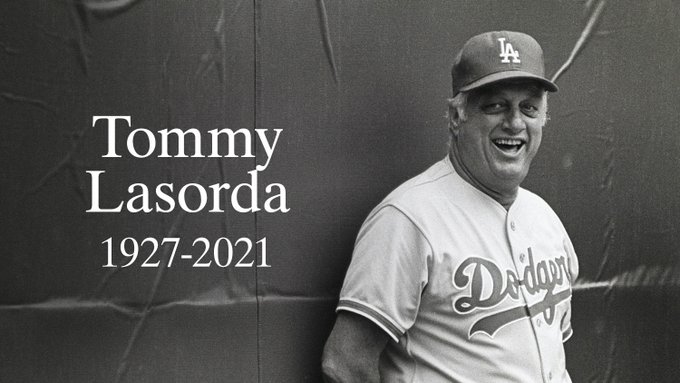 Major League Baseball lost one of its icon MLB managers last night when Tommy Lasorda passed away. Lasorda was manager of the Los Angeles Dodgers for 21 years. Lasorda was recently hospitalized for an undisclosed illness that some believe was the coronavirus. Just three days ago, the Dodgers reported that Lasorda has been released from the hospital and was resting comfortably at his home.

Lasorda had a record of 1,599-1,439 while managing the Dodgers from 1976-96, guiding them to World Series championships in 1981 and ’88. The franchise won four National League pennants and eight division titles under Lasorda. The beloved manager was last seen in public on Oct. 27 in Texas during game 6 victory over the Tampa Bay Rays. The Dodgers won the World Series for the first time since 1988.

The 93-year-old Lasada was an icon with the Dodgers and an ambassador for the team and all of MLB. Everyone, even opponents, loved him. He had a heart attack in June 1996 and retired from managing the Dodgers the following month. In 2000, Lasorda managed the U.S. Olympic baseball team to a gold medal at the Sydney Games. Lasorda was also hospitalized in 2012 in New York after having a heart attack.

The ever-popular Tommy Lasorda was inducted into the Baseball Hall of Fame in 1997. He was, before his death, the oldest living member of the Hall of Fame.