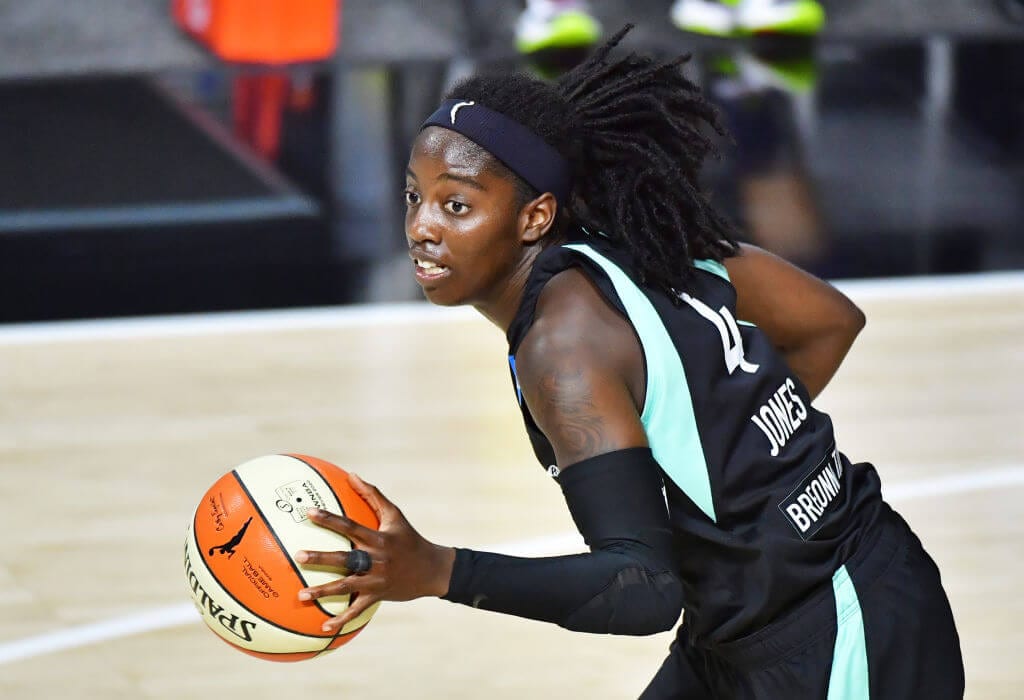 The New York Liberty rookie is the first metropolitan representative on the list since a pair of showings in 2015.

Lou York City woke up to some good news on Tuesday.

Jones’ rookie season wrapped on Sunday. Her name appeared at or near the top of several major statistical categories amongst first-years. She led her fellow debuts in steals (1.4 per game) and also finished fourth among them in scoring (10.8), sixth in assists (2.3). Overall, she also finished fifth in efficiency rating (10.2).

In New York’s Bradenton bubble endeavors, Jones was called upon to take an expanded role in the point guard position after the season-ending injury to top overall pick Sabrina Ionescu in July. Jones had not played the position since her high school days at Florida A&M’s Developmental Research School in Tallahassee, but earned positive reviews for stepping in. Her impact was felt immediately after Ionescu’s injury. When the top pick left July 31’s game against Atlanta with an ankle ailment, Jones went on to score 20 points in a narrow loss.

â€œHer stepping up and playing the PG, which is not really her position, sheâ€™s doing an incredible job of observing everything that Layshia (Clarendon) is doing, following her way,â€ veteran teammate Amanda Zahui B observed over the summer. â€œShe also allows herself to make mistakes at first but then correct them. Sheâ€™s a quick learner and sheâ€™s doing great.â€

â€œThe main thing about Jaz is her energy,â€ Liberty head coach Walt Hopkins added. â€œWhen she brings her energy, no matter what, she brings us a lot. Itâ€™s defensive, itâ€™s toughness, swagger. Jaz has been huge for us.â€

Jones ended her season on a strong note, scoring a team-best 21 points on 8-of-14 shooting in the Liberty’s season finale against the Dallas Wings on Sunday afternoon. Her infantile career-best game through 24 points on August 11 against Los Angeles. It kickstarted a streak of six consecutive games in double-figures for Jones.

Next season, Jones is expected to reunite with former Louisville teammate Asia Durr, the second overall pick of the 2019 draft. In the bubble, Jones was joined by another college teammate, Kylee Shook, who was chosen immediately after her at 13th overall.

Jones is the first Liberty representative on the AP’s rookie squad since 2015, when Brittany Boyd and recent re-signee Kiah Stokes each earned the honor. Other modern nominees for the team include Crystal Dangerfield (Minnesota), Chennedy Carter (Atlanta), Satou Sabally (Dallas), and Julia Allemand (Indiana).

The WNBA’s official awards will be announced throughout the course of the playoffs, which begin on Tuesday in Bradenton’s IMG Academy (7 p.m. ET, ESPN2).