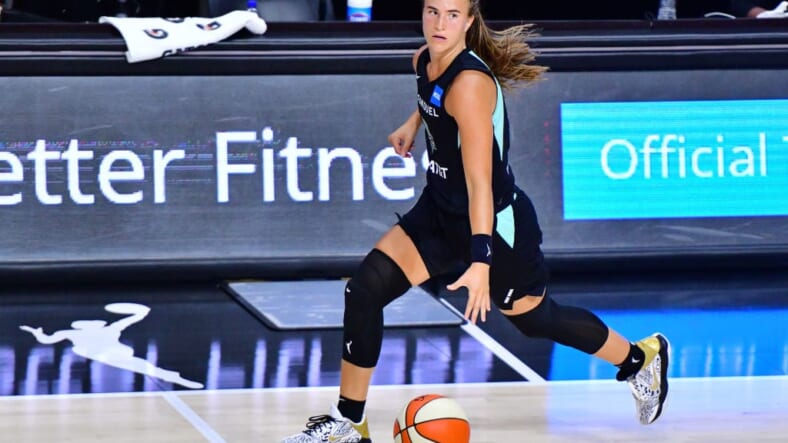 PALMETTO, FLORIDA – JULY 29: Sabrina Ionescu #20 of the New York Liberty dribbles up the court during the second half of a game against the Dallas Wings at Feld Entertainment Center on July 29, 2020 in Palmetto, Florida. NOTE TO USER: User expressly acknowledges and agrees that, by downloading and or using this photograph, User is consenting to the terms and conditions of the Getty Images License Agreement. (Photo by Julio Aguilar/Getty Images)

The New York Liberty’s touted rookie spoke about her brief, yet fruitful, experiences in the “Wubble” as well as her future.

So eager is Sabrina Ionescu to return to sports that she can’t let even a yoga class go by without a sense of competitiveness.

Ever since an ankle injury prematurely ended her earliest endeavors with the New York Liberty, Ionescu has spent her time between rehabilitation in New York and with her support system in her home state of California. In her cross-country travels, Ionescu has picked yoga and pilates at home and ventured to her first instructor-led class on Wednesday morning with her gym opening back up. Her goal in the practice is to “(become) more flexible” and to “be in tune with (her) body”.

But even then, Ionescu couldn’t help but bring her fiery sense of fight that has presented itself on courts in Eugene and Bradenton alike.

“There was someone next to me today that had his hand down on a plank, and I was like ‘no, he’s cheating, that doesn’t count, your hand’s got to be on your hip’,” Ionescu said with a smile in recalling her outdoor class. “On a plank, side-plank, hand’s got to be on the hip or up, you can’t have it on the ground.”

Ionescu feels the same way about her place in the WNBA jersey sales. She placed fourth in the rankings behind league legends Sue Bird, Diana Taurasi, and Candace Parker, but Ionescu’s hoping to move three spots up, admitting “I’m a little bit competitive…even if it’s just jersey selling”.

Adding another talent or two to her already overcrowded scouting report should have Ionescu’s opponents on alert. WNBA opponents were spared an Ionescu takeover when she twisted her ankle during a July 31 contest against Atlanta. Wednesday marked her first time speaking with the media since that injury, as Ionescu recapped her abbreviated freshman campaign and looked toward the future.

Like many, Ionescu faced challenges in 2020, a year that saw her earn the highest highs and endure some emotionally tolling lows. Prior to entering the WNBA’s bubble in Florida, Ionescu added to her overflowing trophy case with Player of the Year honors from the Associated Press, Los Angeles Atheltic Club, and several others. The ongoing health crisis denied her a final attempt at March Madness glory but she was nonetheless named the top overall pick in April’s WNBA Draft. She the first of five rookies chosen by the Liberty that night.

The biggest lesson Ionescu learned from this year was to “cherish the moment that you have”.

“I don’t think I ever expected to miss so many games,” she said. “I think (it’s) really just think being present in the moment, being thankful for what you have, because it can be taken away from you at any moment, with my injury I definitely learned. Obviously, I’m going to continue to learn. It’s not going to be the last time I’m going to get hurt, but it’s about finding ways to continue to prepare and put myself in the best situation possible.”

Ionescu’s injury came in her third game, less than 48 hours after she put up 33 points in just her second career contest. She had 10 more in a dozen minutes against Atlanta but twisted her ankle at midcourt during the second quarter.

“It actually didn’t really hurt,” Ionescu recalled. “My face was completely straight. I don’t know if it was because I was in shock or because I knew I hurt it really bad and I didn’t want to show the other team I was hurt because I wanted to go back in. My first thought was how I could get this wrapped up and continue to play and finish the game because we would’ve won that game.”

“We were going on the run. I knew we would’ve won that game.”

The Liberty wound up falling in that contest as Ionescu’s season ended. She left the bubble soon after to start rehabbing, but her prescience lingered all season long.

Ionescu first endorsed the bubble setting’s dedication to social justice, which she labeled as “awesome to see”. While it was at times tough for her tune in to the exciting games the WNBA had to offer due to her injury…at which point Ionescu would turn to NBA games from Orlando…her focus remained on New York endeavors. The former Oregon Duck also had kind words for her New York teammates, marveling at happenings like Jazmine Jones’ nomination to the All-Rookie team and Kiah Stokes’ newfound propensity to shoot from deep. Ionescu also expressed anticipation in working with Asia Durr, the second overall pick from 2019 who sat out of the bubble proceedings about a bout with COVID-19.

But perhaps most intriguing was Ionescu’s revelation that served as a de facto fifth coach on the sidelines. Ionescu remained in constant with head coach Walt Hopkins, to the point she was texting Hopkins at halftime to relay what she saw from afar.

“There were a few times that I would actually text Walt at halftime of the game if I saw something,” Ionescu said. She jokingly took credit for the Liberty’s 101-99 victory over the Chicago Sky on August 25. “I was telling him some things that I saw and we ended up winning. I told him that I took that win from back home.”

Ionescu has otherwise been training in her home state of California, backed by a support system that includes her family and NBA stars old and new. Newly minted Brooklyn Nets head coach Steve Nash is among them, as is Chris Paul. Each of them reached out to Ionescu after her injury, while she also credited Stephen Curry and Pau Gasol for inspiring words after her first game.

As for the future, Ionescu is confident she’ll be ready in time for the 2021 season, a year she hopes will be held in the confines of Barclays Center and the WNBA’s other home arenas. Contact drills have been put on hold due to the health crisis, though Ionescu is content to flourish in her new activities of yoga and pilates. Overseas basketball remains an option, with anywhere in Europe being her preferred destination.

But despite the Liberty’s 2-20 struggles this season, Ionescu can’t help but savor the potential and opportunities in New York. Ionescu is looking at 2021 as a de facto second rookie season, the threat of consequence-free basketball looming large over the WNBA.

Uncertainty does lie ahead for New York, as they enter what could be a chaotic free agency period and/or bid farewell to several young contributors as familiar faces like Durr start to work their way back. But, if 2020 proved anything, it’s that it’ll take a heck of a lot more than a mere injury to derail the confidence and demeanor of Ionescu.

“I kind of just took it and continued to go one foot in front of the other,” Ionescu said of her situation. “What’s next? What can I do to get better? I think this time that I’ve had, being at home, seeing my family more than I ever had, and obviously just starting this foundation of what I want to do with my career.”

“It’s really given me time to reflect. I’m really blessed to have played three games in the league just to see what it was like, how I need to train, how I need to prepare to play at that level. I can focus on that this offseason, which I’m really excited about.”