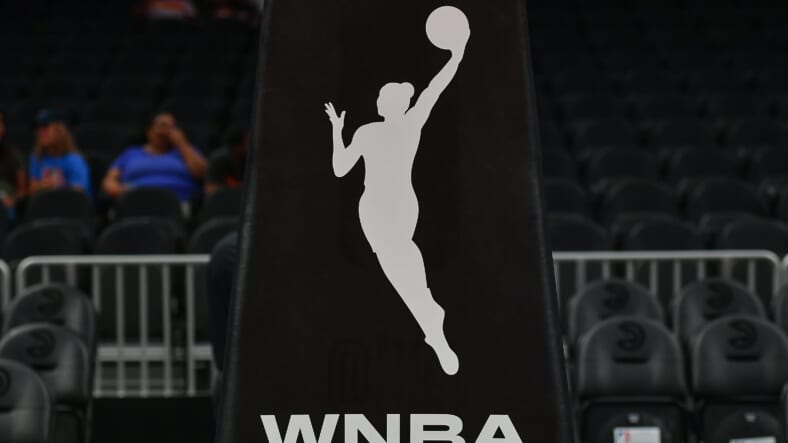 ATLANTA, GA AUGUST 06: The WNBA logo covering the base of the basket during the WNBA game between the Minnesota Lynx and the Atlanta Dream on August 6th, 2019 at State Farm Arena in Atlanta, GA. (Photo by Rich von Biberstein/Icon Sportswire via Getty Images)

The New York Liberty have released a statement in support of social justice in the midst of Thursday’s postponements in the WNBA.

The New York Liberty have released a statement in the wake of ongoing demonstrations against racial injustice across the professional sports leagues of the United States.

The statement opens with the names of African-American victims of systemic racism and how long it has has been since the respective crimes. Perpetrators of the crimes in question, particularly have yet to face legal repercussions.

“While we will not take the court today, we will continue to stay loud in our pursuit of justice. The New York Liberty organization stand in solidarity with our players and demand justice for #JacobBlake, #GeorgeFloyd,Â #BreonnaTaylor, #AhmaudArbery, and the many human lives affected by brutal police encounters. We will not be silenced. All lives canâ€™t matter until Black lives matter.”

New York was originally set to play on Thursday night against the Dallas Wings, but the WNBA has confirmed that no games will be held. Three games were scheduled for Thursday in the league’s Bradenton bubble, including one between the Chicago and Indiana and a late-night tilt featuring Las Vegas and Seattle. All postponed games, including three others from Wednesday, will be rescheduled.

Thursday was set to be the Liberty’s annual “UNITY Day” game, with a special focus on social justice. The team hosted a panel on Wednesday late afternoon, featuring guard Layshia Clarendon. New York was among the country’s first professional sports teams to publicly advocate for social justice, wearing warm-up shirts reading “#BlackLivesMatter” prior to a 2016 game.

Each of the WNBA’s dozen teams has worn uniforms bearing the name of Breonna Taylor, who was fatally shot by Louisville police officers executing a no-knock search warrant. The officers in question have not been arrested.

“As the injustices persist, so does the work,” the statement says. “Today marks what should have been the Libertyâ€™s 4th annual UNITY Day game which is devoted to telling Breonna Taylorâ€™s story and highlighting the #SayHerName campaign. In light of todayâ€™s protest, our UNITY Day will be rescheduled at a later date.”

Clarendon was among WNBA representatives who spoke with ESPN’s Holly Rowe about the decision not to play. Each of the players present wore shirts calling for the arrest of Taylor’s killers. The team has united with the #SayHerName campaign for thier 2020 bubble proceedings to spread awareness and information of racial injustice and to encourage voting in national and local elections.

“It is important to note that this is not a strike, this is not a boycott. This is affirmatively a day of reflection, a day of informed action and mobilization,” Los Angeles Sparks forward and WNBPA President Nneka Ogwumike said. “Today, we call upon Kentucky Attorney General Daniel Cameron to arrest the officers that killed Breonna Taylor. Today, we call upon Wisconsin Attorney General Josh Kaul to investiage the officers that were involved in the shooting of Jacob Blake.”

Those stationed at the Bradenton bubble also hosted a players-only meeting and candlelit vigil.

Members of the Liberty have continued to speak out against racial injustice throughout the year. The incident involving Blake in Kenosha, Minnesota has been no exception.

.@KayNurse11: "Black Lives Matter, the fight against racism, standing up for change, calling for justice — that always has been and always will be bigger than basketball." pic.twitter.com/koD8qbukNa