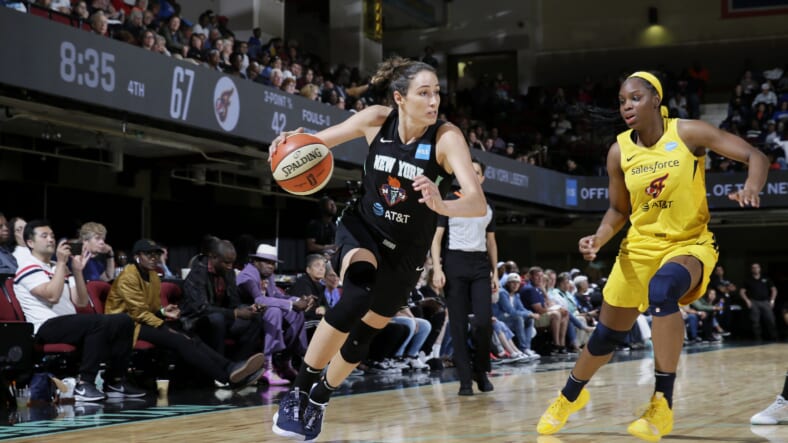 WHITE PLAINS, NY - SEPTEMBER 6: Rebecca Allen #9 of the New York Liberty drives to the basket against the Indiana Fever on September 6, 2019 at the Westchester County Center in White Plains, New York. NOTE TO USER: User expressly acknowledges and agrees that, by downloading and/or using this photograph, user is consenting to the terms and conditions of the Getty Images License Agreement. Mandatory Copyright Notice: Copyright 2019 NBAE (Photo by Steven Freeman/NBAE via Getty Images)

The Australian-born Allen, the longest-tenured member of the New York Liberty, has chosen not to take part in the upcoming WNBA season.

The New York Liberty will be missing another veteran if and when they take the court for the 2020 WNBA season.

Guard/forward Rebecca Allen announced on Thursday that she will not partake in the league’s potential 22-game season, set to held in a “bubble” setting at the IMG Academy in Bradenton, Florida. The WNBA previously announced that it is aiming for a July 24 start to its 24th season of play.

“This has absolutely been one of the toughest decisions, but after much thought and discussions, I have decided to opt out of the 2020 season in Florida,â€ Allen said in a team statement. â€œThe uncertainty of the COVID-19 crisis and the logistical health risks related to travel have led me to conclude that itâ€™s best if I not play in the WNBA this year.”

Thursday marked the deadline for WNBA players to inform their squads about their potential participation in the Bradenton bubble. Other opt-outs include defending rebound champion Jonquel Jones of the Connecticut Sun and LaToya Sanders of the defending champion Washington Mystics. Others, including Renee Montgomery and Tiffany Hayes of the Atlanta Dream, have opted to take the year off to focus on social advocacy.

“I would like to thank the Liberty for their support and understanding,” Allen added. “Iâ€™ll certainly miss all my teammates, staff and fans this year. Iâ€™ll be cheering loud from Australia and I look forward to getting back on the court in 2021.â€

New Liberty head coach Walt Hopkins had been looking forward to working with Allen, having constantly sung her praises since taking the job in January.

“Sheâ€™s got a tremendous skill set and sheâ€™s got a rare mix of characteristics in that sheâ€™s about 6â€™2 and sheâ€™s really long and sheâ€™s deceptively athletic to go with her ability to put the ball on the floor and get fouled and shoot the three at such a high level,” Hopkins said earlier this spring. “Thatâ€™s really the type of player we absolutely need for this system to work and weâ€™ve got one built-in already. On top of that, sheâ€™s a phenomenal person.”

Allen, 27, was set to be the longest-tenured member of the Liberty, having been with the team since coming on as a free agent in 2015. She developed a reputation as a strong defender off the bench, as her wingspan earned her the nickname “Spida” in her native Australia. Allen enjoyed a bit of a breakout season in 2019, posting career-best averages in points (7.2) and minutes (17.2). She also finished seventh in the WNBA in three-point percentage (42.6 percent). Last August, Allen set a Liberty record with 20 points in the second quarter in a home tilt against Minnesota. Such a tally was two points behind the league’s best single-period scoring output (set by Diana Taurasi of Phoenix in 2006).

This offseason, Allen earned MVP honors in Poland’s Basket Liga Kobiet, partaking in Arka Gdynia’s perfect season prior to the league’s coronavirus-induced shutdown in March. Allen also made a name for herself in Australia’s national basketball endeavors. Part of the women’s team known as the “Opals”, Allen averaged 14 points in a trio of Olympic qualifiers. The Opals punched their ticket with wins over Chinese Taipei and India. Additionally, Allen was named to All-Star Five of the 2019 FIBA Women’s Asia Cup in Bangalore. She appeared alongside Liberty teammate Han Xu and led the Opals with 20 points in their bronze medal game victory over South Korea.

Allen is one of four New Yorkers sitting out the 2020 season. Fellow international representatives Han and Marine Johannes announced their intentions to stay in their respective homelands of China and France in May, while Liberty newcomer and Allen’s Opals teammate Stephanie Talbot chose to likewise remain in Australia.

With Allen’s temporary defection, Amanda Zahui B is slated to be the longest-tenured New Yorker on the hardwood, having joined the team in a 2016 trade with the Tulsa Shock. Zahui B penned an emotional tribute to her close friend Allen on Twitter.

It’s a forever& ever thing. ?? pic.twitter.com/KE6CYht2tH

She was far from the only New Yorker to publicly support Allen’s decision.

“Rebecca is a consummate professional and a key factor to the teamâ€™s new style of play,â€ Liberty general manager Jonathan Kolb said. â€œWe understand that these decisions are never easy and, while she will certainly be missed this season, we fully support her decision to do what is best for her and her family.â€

The Liberty were set to play their first full-time season at Barclays Center in Brooklyn prior to the WNBA’s postponement of the 2020 season. Their current roster features six rookie, headlined by top overall WNBA Draft pick Sabrina Ionescu from Oregon.