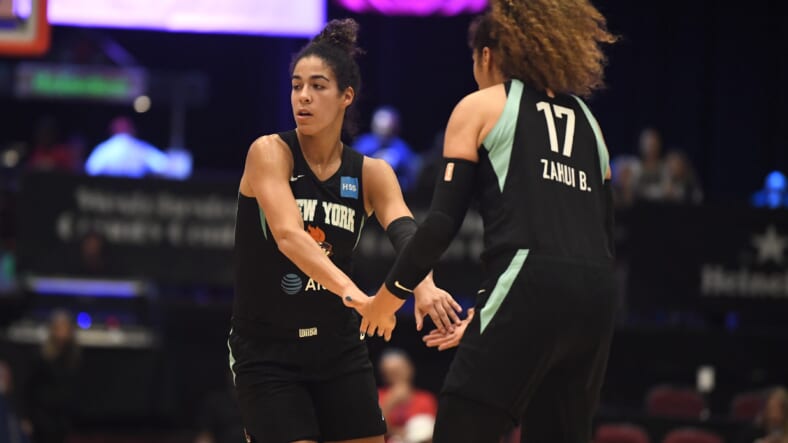 NEW YORK, NY - AUGUST 27: Kia Nurse #5, and Amanda Zahui B. #17 of the New York Liberty hi-five each other against the Phoenix Mercury on August 27, 2019 at the Westchester County Center in White Plains, New York. NOTE TO USER: User expressly acknowledges and agrees that, by downloading and/or using this photograph, user is consenting to the terms and conditions of the Getty Images License Agreement. Mandatory Copyright Notice: Copyright 2019 NBAE (Photo by Catalina Fragoso/NBAE via Getty Images)

One brutal period and countless turnovers once again came back to bite the New York Liberty in the Bradenton bubble.

The Liberty lost the ball 18 times on Saturday night, which led to 33 points for the Connecticut Sun. Those missed chances and a ten-point defeat in the third quarter led to an 82-65 victory for the Sun, dooming the Liberty to their fourth straight double-digit loss. Alyssa Thomas had 25 points on 10-of-14 shooting, while DeWanna Bonner had a double-double with 14 points and 12 rebounds.

“It’s really (about) continuing to find consistency, individually and collectively. That’s going to continue to be about us continuing to be hyper-focused on each individual, where we can get each player the ball where they’re most comfortable,” head coach Walt Hopkins said of the Liberty’s focus over their final nine games. “We really need to shore some things up defensively but it was really the turnovers again. Part of that comes from…people being in positions, being indecisive, and not playing with confidence. I think that’s probably the biggest thing contributing to those turnovers.”

After reaching 85 points on Thursday night against Chicago, the Liberty (1-12) struggled offensively, shooting 37 percent from the field. They were able to keep pace with physicality and stronger defense, as well as continued diversity in their scoring. Four New Yorkers had at least 10 points, one short of the output on Thursday. Kia Nurse paced the team with 17, while rookie Jazmine Jones had 11 more to reach double-figures for the sixth straight game.

But a tough third quarter, which saw the Liberty get outscored 21-11, proved to be their downfall as the team struggled to once again play a full 40 minutes. The team continued to celebrate the little victories, such as Jones’ streak and increased minutes, and Kiah Stokes’ rediscovered propensity to shoot from the outside (sinking two of six attempts and reaching double figures for the second straight game).

There’s no denying, however, that the endless stream of losses can take its toll on a squad, especially with little opportunities to right their wrongs thanks to the bubble’s congested schedule.

“We have so many young people. You can’t stop practice enough, you can’t stop the game enough, because we have to keep playing,” veteran guard Layshia Clarendon, she of 12 points, said. “I think that’s one of the hardest parts for me. I just want to stop, teach, and tell people things, but we don’t have that luxury. We’re practicing on TV every night through our games. You see the different point differentials in some of these losses.”

“Essentially, if you really look at what confidence is, you always have it. It’s just the fact that doubt, or concern…comes into your mind and clouds that,” Nurse added. “The confidence is there, it’s just behind some doubt. You just got to move it out of the way a little bit. You’ve got to be able to let it go. A lot of times, it can’t come from wins and losses. It has to come from the ability to know in yourself, and in your mind and heart that you put that work in.”

Defending WNBA finalists, Connecticut (6-8) has righted their ship, winning five of their last seven after a 1-6 start. The two teams will meet again on September 1.

The Liberty return to action on Tuesday night, facing a rematch with the aforementioned Chicago Sky (7 p.m., Fox Sports Go/CBSSN).