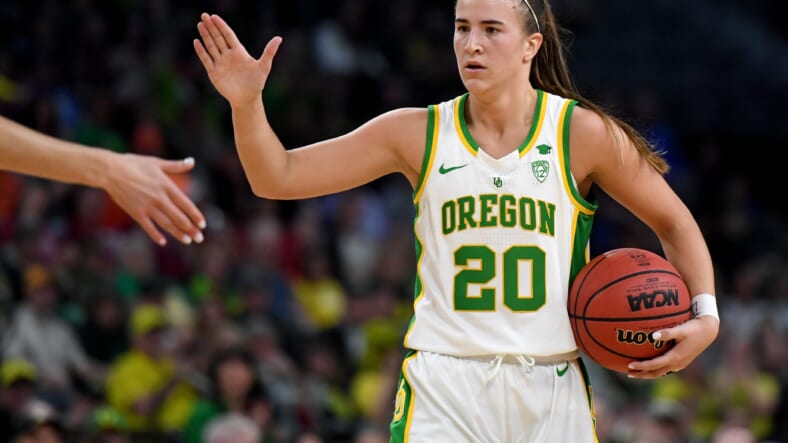 LAS VEGAS, NEVADA – MARCH 08: Sabrina Ionescu #20 of the Oregon Ducks high-fives a teammate as they take on the Stanford Cardinal during the championship game of the Pac-12 Conference women’s basketball tournament at the Mandalay Bay Events Center on March 8, 2020 in Las Vegas, Nevada. The Ducks defeated the Cardinal 89-56. (Photo by Ethan Miller/Getty Images)

Another superstar is going to Brooklyn.

The New York Liberty selected must-see phenom, Sabrina Ionescu, out of the University of Oregon. NCAA leader in triple-doubles (26) for both men and women, will now be playing in the same building as Kevin Durant and Kyrie Irving. Needless to say, next year youâ€™re going to want to be at Barclay Center.

There is no doubt Sabrina is ready for the spotlight of New York City. Entering her senior season at Oregon, her team was ranked as the favorites to win it all after falling short in the final four the year prior. Oregon opened up with an astounding exhibition win against the USA Womenâ€™s team. She followed up winning her third consecutive Â PAC-12 title and swept every national player of the year award. After hearing her name get called first, Ionescu doesnâ€™t feel the nerves kick in at all.

It is really a blessing to able to go 1. I donâ€™t feel any pressure,â€ Ionescu said. â€œIâ€™m really excited to get to Brooklyn and just enjoy the city and start playingâ€

It was no surprise to anyone that Ionescu was drafted first overall after a historic collegiate career. Oregonâ€™s all-time leader scorer holds Oregonâ€™s single-game assist record, and PAC-12 tournament title game scoring record. On top of all that, Sabrina became the first player ever to record 2,000 points, 1,000 assists, and 1,000 rebounds. These are just a few of her many accolades at Oregon.

Sabrina is also no stranger to the NBA world. She drew attention from many NBA superstars and even have close relationships with many of them. But no one spoke as highly about her as the late Kobe Bryant did.

I havenâ€™t seen somebody be able to approach the game the way that she approaches it on a collegiate level. The system that Oregon runs, and how she handles the ball and facilitates opportunities for her teammates, I havenâ€™t seen that.â€ Kobe said about Sabrina.

Sabrina will bring stardom that we have never seen in the WNBA. She was the first-ever womenâ€™s college player to have her own jersey sold to the public, which sold out on the Nike website within itsâ€™ first few hours. Her popularity isnâ€™t going away anytime soon either, her new Liberty jersey sold out one hour after she was drafted 1st. We saw someone experience the same type of hype coming out of college really recent, Zion Williamson.

Ionescu now enters the WNBA with the whole basketball world watching to see what will she accomplish next, and I promise you, you donâ€™t want to miss out on it.