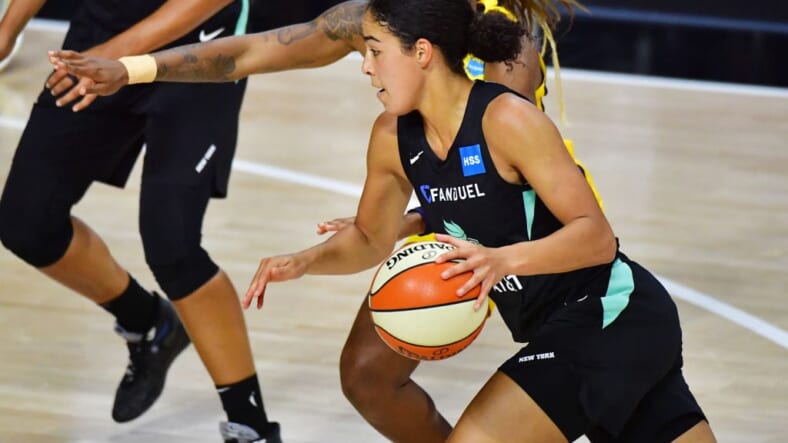 PALMETTO, FLORIDA – AUGUST 13: Kia Nurse #5 of the New York Liberty drives to the basket during the first half against the Indiana Fever at Feld Entertainment Center on August 13, 2020 in Palmetto, Florida. NOTE TO USER: User expressly acknowledges and agrees that, by downloading and or using this photograph, User is consenting to the terms and conditions of the Getty Images License Agreement. (Photo by Julio Aguilar/Getty Images)

Kia Nurse and Jazmine Jones united for 33 points for the New York Liberty in a decent effort against the defending WNBA finalists.

Growth was once again on display for the New York Liberty on Tuesday night, even if the scoreboard wasn’t willing to cooperate.

The Liberty bench tallied 49 points to help keep things respectable, led by a combined 33 from the Kia Nurse/Jazmine Jones tandem. But it wasn’t enough to counter a double-double showing from DeWanna Bonner, who tallied 27 points and 12 rebounds in a 70-65 victory for the Connecticut Sun.

New York (2-14) kept pace with a Connecticut squad in the midst of a playoff push. Head coach Walt Hopkins was pleased with the ensuing effort after his team trailed 18-8 after the first quarter. The Liberty wound up winning the second quarter 24-11 to build a 32-29 halftime lead.

“That second unit tends to do a pretty good job of picking up the energy,” Hopkins said of his bench. “That balance of having one or the other, having a group of players that picks us up, it’s what’s been keeping us in games throughout the year. It’s having the whole group show up consistently that’s been really hard.”

“The story of the game was really how well that second unit played, particularly in the second quarter to bring us back from an 18-8 first quarter. We ended up winning that second quarter 24-11, which is pretty remarkable for a young group. It was great to see.”

Nurse led all New York scorers in the effort with 18 points. Tuesday’s game saw her come off the bench for the first time since August 4, 2018, with Paris Kea taking her usual spot in the starting five. She shot 4-of-11 from the field but got to the foul line 12 times, sinking all but two of her attempts.

“We continued to play hard like we always do. We gave ourselves a chance to win this game,” Nurse remarked of the effort. “We cut it down a bit and traded baskets in the fourth. I think that confidence will help to move us forward in terms of growth as well.”

Assisting Nurse was the rookie Jones, who put in 15 points. Her fellow 2020 draft pick and Louisville alumna Kylee Shook had a perfect day from the field, sinking all four of her attempts from the field and also grabbing four rebounds. Amanda Zahui B followed up a 21-rebound showing on Saturday after against Las Vegas with 10 more against the Sun.

“(Shook) has been working really hard on being more physical,” Hopkins said. “It takes some time when you’re a longer player. You have to learn how to be physical, embrace physicality to create contact. She was so much better in that regard. There’s still room (for improvement), but Kylee really responded and gave us some great minutes.”

Alas for the Liberty, they were unable to sink a win from the defending WNBA finalists. The Sun (8-9) kept the Liberty in check during a strong fourth quarter, which saw them lead by as much as ten. Connecticut, stationed in seventh, is currently three games up on ninth-place Indiana, the first team out of the playoff proceedings. Their effort was helped by a sweep of the Liberty in the Bradenton bubble.

The Liberty return to action on Thursday night against the Atlanta Dream (6:30 p.m. ET, YES/CBSSN). Atlanta previously took an 84-78 decision on July 31.