New York Liberty: Amanda Zahui B gives thanks and farewell 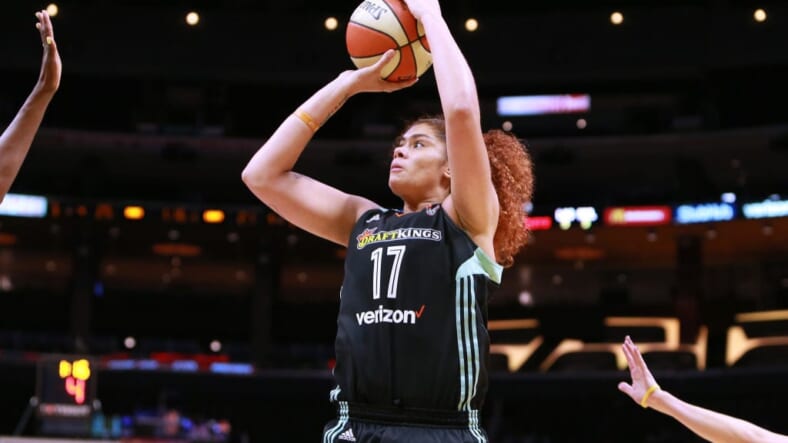 LOS ANGELES, CA - AUGUST 04: Amanda Zahui B. #17 of the New York Liberty handles the ball against the Los Angeles Sparks during a WNBA basketball game at Staples Center on August 4, 2017 in Los Angeles, California. (Photo by Leon Bennett/NBAE/Getty Images)

Amanda Zahui B, one of the longest-tenured members of the New York Liberty, is moving to the Los Angeles Sparks.

Another Swedish athlete who took over Madison Square Garden’s staging area is moving on.

New York Liberty veteran Amanda Zahui B has announced her metropolitan departure, as the WNBA veteran will join the Los Angeles Sparks. Zahui B, a Stockholm native, was the longest-tenured member of the team alongside fellow international import Rebecca Allen. She originally joined the Liberty via a trade with the Tulsa Shock five years ago. The Minnesota alumna entered the Association as the second overall pick in the 2015 WNBA Draft, chosen by the Shock, who now go by the Dallas Wings moniker.

Over five seasons in seafoam, Zahui B made her prescience felt on and off the court. She played a particularly large role in the Liberty’s 2020 endeavors in the Bradenton bubble, serving as a “baby vet” on a team laden with rookies. Zahui B averaged 9.0 points and 8.5 rebounds in her final Liberty season, partaking in all but one of the 22 games. Among her most cherished New York memories was a 37-point showing during a June 2019 win in Los Angels (the second-best single-game output in Liberty history) and hauling in a WNBA-record 21 defensive rebounds last August against Dallas, breaking a record held by Detroit’s Cindy Brown for over two decades. Along the way, Zahui B endeared herself to her Liberty teammates, developing strong friends with players like Allen and Han Xu.

After her departure was made official, Zahui B took to Instagram to pen a heartfelt farewell and thanks to her New York compatriots. Among the photos included in the post included her team gathered at midcourt at MSG, a Floridan pose with rookie Jazmine Jones, Sabrina Ionescu, Kylee Shook, and Leaonna Odom, and her participation in the 2018 NYC Pride March.

“I came to New York very confused, shattered in many ways, and really kind of lost. Lost in Godâ€™s plans. I had no clue that NY would become home,” Zahui B’s caption partially reads. “I grew so much as a player and even more as a person.”

“Finding my confidence would not have been possible without each and every single one of my teammates through my NY years,” she continued. “I donâ€™t even know how I wouldâ€™ve made it without yâ€™all crazy asses! From our Turn-up crews to standing up against injustice, police brutality, racism, and for all kind of humans. No matter where or how, yâ€™all will always be in my heart and we shall continue to make a change together.” [sic]

Despite the loss of Zahui B, the Liberty have remained active in the transaction front, welcoming in 2020’s Most Improved Player champion Betnijah Laney from Atlanta, as well as Natasha Howard and Sami Whitcomb from Seattle through a three-team trade that also involved the Phoenix Mercury.