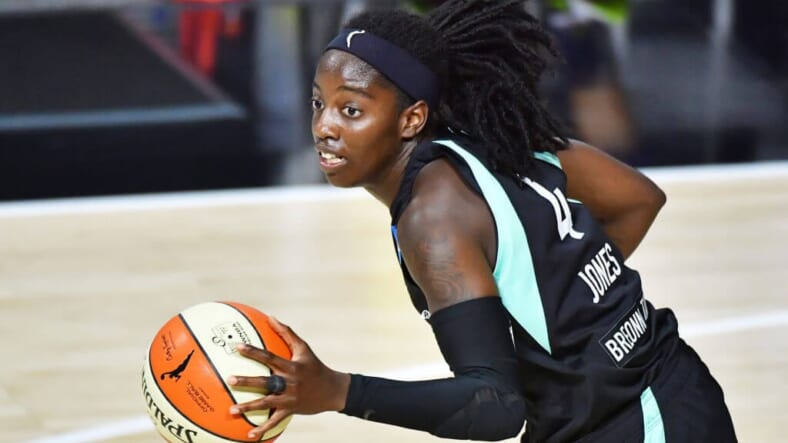 Having turned 24 on Thursday, the New York Liberty rookie recently wrapped up a strong freshman campaign in the Bradenton bubble.

If the 2020 season was any indication, the New York Liberty might’ve found lasting franchise contributors at both the top and bottom of the first round of the most recent WNBA Draft.

Eleven picks after the highly publicized selection of Oregon’s Sabrina Ionescu with the top overall pick, the Liberty closed things out by acquiring Jazmine Jones with the 12th and final choice of the opening proceedings. That pick was obtained in the historic trade that sent franchise face Tina Charles to Washington in a multi-team deal.

A rebuilding campaign for the Liberty inside the WNBA’s Bradenton bubble was pacified by the performance of Jones. The newly-minted 24-year-old, who celebrated her birthday on Thursday, wound up becoming one of the Liberty’s most consistent silver linings, appearing toward the top of almost every major rookie stat, including the freshman league-lead in steals (1.4 per game). Her efforts led to a nomination for the WNBA’s official All-Rookie team, the first New York representative since Brittany Boyd and teammate Kiah Stokes made it in 2015.

â€œThe main thing about Jaz is her energy,â€ head coach Walt Hopkins added. â€œWhen she brings her energy, no matter what, she brings us a lot. Itâ€™s defensive, itâ€™s toughness, swagger. Jaz has been huge for us.â€

In honor of Jones’ special day, ESM has four facts about the former Louisville Cardinal…

Jones’ off-the-court accolades as a Cardinal were just as illustrious as the ones she earned on the hardwood. In addition to countless courted conference honors, Jones was named to the ACC’s All-Academic team twice, including her senior campaign. She majored in criminal justice, and, upon choosing Louisville over Floridian rivals Florida State (the Tallahassee native was offered a Seminoles scholarship in eighth grade) and Miami, revealed to the Courier Journal’s Jonathan Lintner that she wanted to take up a different kind of defense through a job in the FBI.Â

2020 Was a Throwback to Her High School Days

Jones was the first player with the “SG” initials (shooting guard) attached to her name chosen in April’s draft. However, the early injury to the touted point guard Ionescu forced her into territory unchartered since her high school days at Florida A&M’s Developmental Research School.

When Ionescu was lost for what was eventually the year in just her third WNBA game, Jones was called upon to take her spot. She responded with six consecutive games in reach double-figures and some tenacious defense that got the attention of her veteran WNBA peers.

“She really wants to be great,” Zahui B said. “She goes hard in practice and she’s very vocal. She is a great leader, so for her stepping up and playing the one, which is not really her position.”

Jones wound up averaging 10.8 points per game, one of only four full-season rookies to do so.

No One Has Played More Games as Louisville Cardinal

Louisville has produced some strong players from its women’s basketball program. The Liberty have recently taken to painting their new Brooklyn borough maroon, as Jones is one of three former Cardinals chosen over the past two drafts. Asia Durr, the second overall pick from 2019, missed the bubble endeavor after testing positive for COVID-19, but Jones was joined by Kylee Shook, who chosen immediately after her as the first pick of the second round.

It’s Hard to Keep Up With the Joneses

It feels like Jones was destined to make some sort of difference in the athletic world from the very start, as sports runs through her blood. Her father Reginald is a former Florida A&M Rattler, while one of her sisters, Gigi Thomas, foreshadowed her success on the hardwood at both Appalachian State and Jacksonville. Her brother, Reginald Jr., earning 60 tackles over four seasons on the defensive line for Florida International’s Golden Panthers.