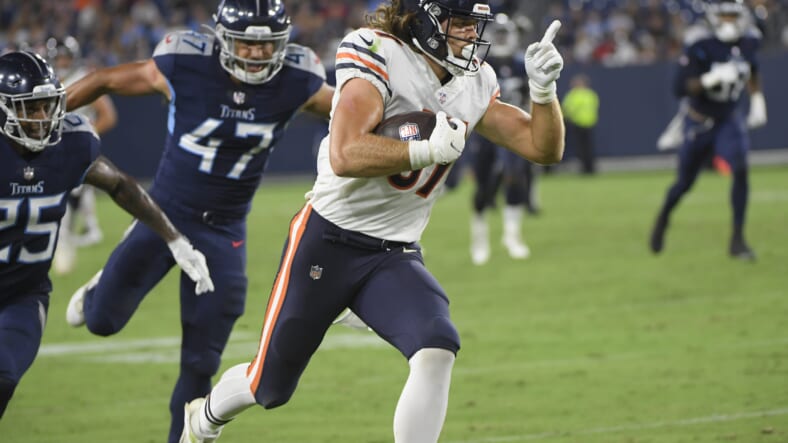 Heading into preseason, the speculation for the Chicago Bears at the tight end position revolved around second-year player Cole Kmet taking a major jump forward. Veteran Jimmy Graham was retained, along with J.P. Holtz and Jesper Horsted. Chicago also added Jesse James ahead of training camp.

In the Bears preseason finale, the biggest star was Jesper Horsted, who’s heading into year three with the team. After spending 2020 on the Bears practice squad, Horsted entered 2021 on the roster bubble, facing an uphill climb to make the roster. Against the Tennessee Titans, Horsted totaled three touchdowns, including five receptions and 103 receiving yards.

“This is year 3 and it feels great to be comfortable in the offense and not have to be out there thinking about my responsibilities,” Horsted said via the Bears official YouTube Channel. “I have great chemistry with all of the quarterbacks, from previous years in training camp and I just felt very comfortable out there today and I think it showed.”

With the Bears expected to finalize the roster over the next few days, Horsted’s strong performance may not necessarily soldify his roster spot but cutting Horsted just got harder. Here’s what we know: Kmet, Graham, and James are locks. If the Bears decide to carry four tight ends, Horsted could be the final player, over Holtz.

Horsted’s receiving ability also increases his chance of making the roster. When looking at the offense that head coach Matt Nagy expects to run, a true receiving tight end is a necessity. In the past, Horsted has shown enough potential to warrant being a rotational player in the Bears offense. In 2019, injuries forced Horsted into the Bears lineup, where Horsted caught eight receptions for 87 yards, averaging 10.9 yards per reception.

Horsted’s confidence is a positive sign for the Bears who are hoping to stabilize the tight end position for the foreseeable future under Nagy, especially with quarterback Justin Fields now in the fold.