High standards are the key for Eddie Jackson heading into 2021 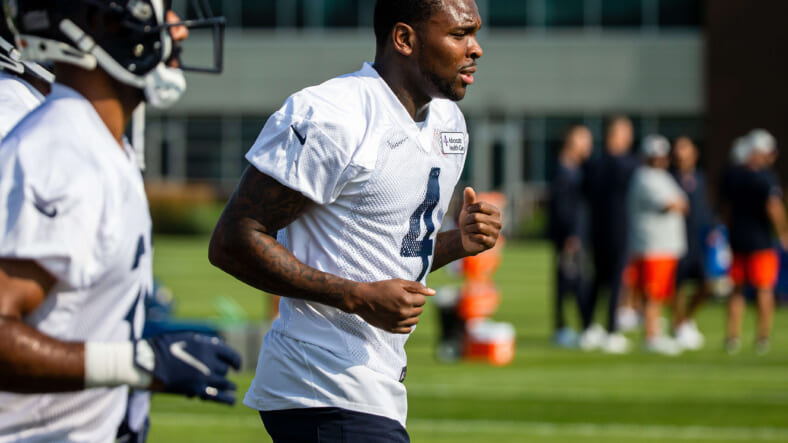 Entering 2021, expectations for the Chicago Bears is that safety Eddie Jackson has a bit of a bounceback season. After two years where production declined, Chicago has a new defensive coordinator in Sean Desai who is expected to implement more single-high safety looks, allowing Jackson to freely roam the field.

When Chicago opted to revamp the secondary by releasing cornerback Kyle Fuller, Jackson quickly became the team’s only starter at defensive back leftover from the 2018 season. The same season, Jackson would have six interceptions but since then, his interception total has been just two since 2019.

Entering year five, Jackson’s standards remain the same as when the former fourth-round pick entered the league in 2017: Be the best possible defensive back on the field, making quarterbacks account for his presence on every play.

“Me personally, I hold myself to a high standard,” Jackson said via the Bears official YouTube channel. “Everyone here does the same. Even though they took away the touchdowns, I feel like there was some things I could’ve did better and capitalized better than just sitting up, tripping over two touchdowns that got called back.”

After signing a four-year extension at the start of the 2020 offseason, Jackson is set to be on the Bears through the 2024 season, giving the former Alabama product at least four more years to prove himself and continue to play safety at a high level.

“If you’re a great one, you’re gonna find a way to make a play,” said Jackson referring to advice that Bears star pass rusher Khalil Mack said regarding Jackson.

Jackson is looking to bounceback in 2021 and while Bears defensive coordinator Sean Desai will continue to put Jackson in positions to succeed, something that should benefit the fifth-year veteran throughout the 2021 season. Great players in any sport know how to impact the game consistently at a high level and Jackson, who falls in the same category is hoping to do so consistently in 2021.