Did Nick Foles take a jab at the Chicago Bears coaching staff? 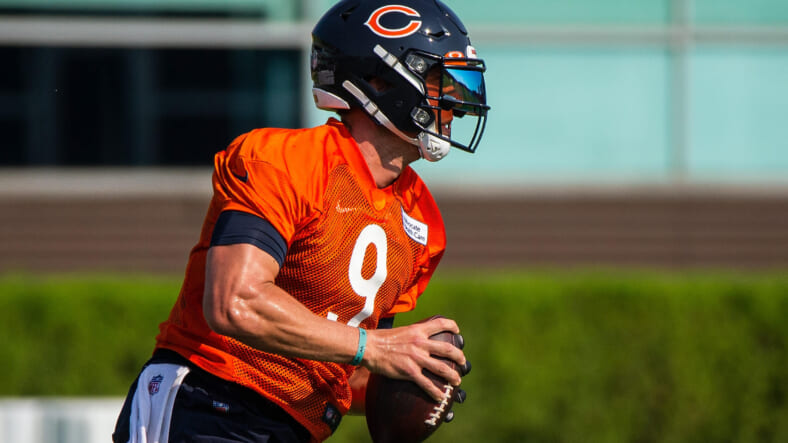 The Chicago Bears enter 2021 with newfound hope at the quarterback position after signing veteran Andy Dalton drafting rookie Justin Fields. Despite an overhaul of the quarterback room, the only veteran left from 2020 at the position is third-string quarterback Nick Foles, who started seven games in 2020.

Let’s flashback to last offseason: When the Bears acquired Foles, Chicago’s thought process was simple: Create competition at the quarterback position. Foles’ familiarity with the coaching staff, including head coach Matt Nagy, quarterbacks coach John DeFilippo, and offensive coordinator Bill Lazor, along with his knowledge of the offense was a reason many believed Foles would succeed in Chicago.

On Monday, Foles spoke to the media for the first time since the conclusion of the 2020 season. With Foles name popping up in trade rumors, he was asked about his thoughts regarding the 2020 season and why the Bears stumbled throughout his time as starting quarterback.

“There’s a lot of reasons that I can’t talk about to be honest with you,” Foles said via the Bears official Twitter account. “In the right situation, with the right people, that understand me as a player, I know what I can do because it’s been done.”

The first red flag in the entire press conference was when Foles essentially said that he wasn’t going to be talking about what went wrong. Foles answer clearly will draw mixed reactions, especially since he didn’t directly mention Nagy or the offensive staff, who some blame for the Bears failures last season.

With rumors swirling regarding Foles future with the Bears, the Indianapolis Colts have been mentioned as a possible trade destination. Under current Colts head coach Frank Reich, Foles led the Philadelphia Eagles to a Super Bowl victory in 2017, reviving the Eagles season at a time when everything seemed lost.

Foles referencing his success with Reich and the Eagles should speak volumes as to what seemingly happened with the Bears last season and why everything went wrong. After praising Reich, it’s clear that Foles views the Colts coaching staff as a better fit compared to what the Bears have to offer going into 2021. Foles press conference also implied that the veteran quarterback has moved on from 2020 and is ready to start fresh in 2021, perhaps elsewhere.