Despite questions, Ryan Pace sees CB as a strength for Chicago Bears 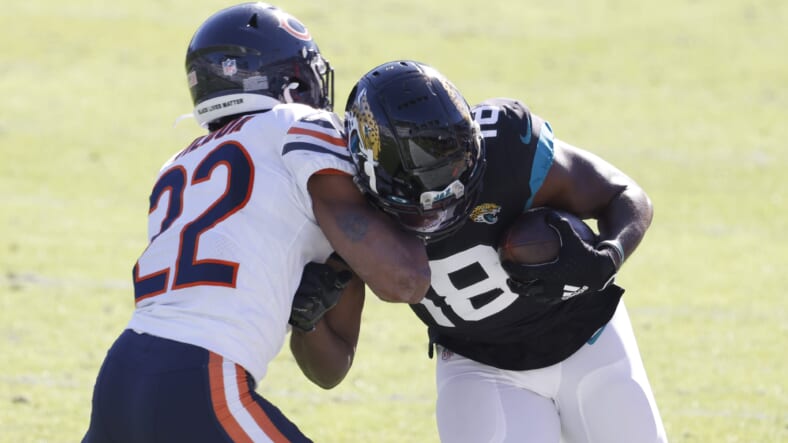 When the Chicago Bears announced a flurry of roster moves on Wednesday afternoon, cornerback was among the key positions that raised major eyebrows for many. The Bears moved on from veteran Kyle Fuller this offseason while opting to keep just five cornerbacks: Artie Burns, Xavier Crawford, Jaylon Johnson, Duke Shelley, and Kindle Vildor.

In a pass-happy league, investing in cornerbacks is a necessity. Chicago’s front office will rely on talents like Johnson and Vildor to keep the team afloat but the Bears still need to do some due diligence on the cornerback market, especially as the dust begins to settle with rosters being fully trimmed across the league.

“What’s neat about that is there’s a mixture of young guys and vets,” said Bears general manager Ryan Pace via the team’s official YouTube Channel. “So you think about the corner position with Kindle Vildor, like we’re excited about where he’s heading and how he’s playing. Excited about Artie Burns and then obviously, Jaylon Johnson, he’s going to be a really good player for us for a long time. That’s not even getting into the nickles.”

Pace isn’t wrong. There is a mixture of young guys and veterans at the CB position for the Bears. Bruns is a former first-round pick who missed least season due to a torn ACL. Meanwhile, Johnson had 15 pass breakups as a rookie, setting the stage for what will be an intriguing sophomore campaign. Vildor has been praised by defensive coordinator Sean Desai throughout the offseason as a player who’s earned the right to play in the NFL.

Pace’s vote of confidence in the cornerback room is merely a general manager who’s willing to back and trust every decision that was made this offseason. Fuller’s release to save salary cap space while going all-in on a room filled with mostly day two and three picks will be a key point of conversation throughout the regular season, especially if younger players don’t continue to develop at the rate that the Bears are hoping they will.