Could Matt Nagy return in 2022 for the Chicago Bears? 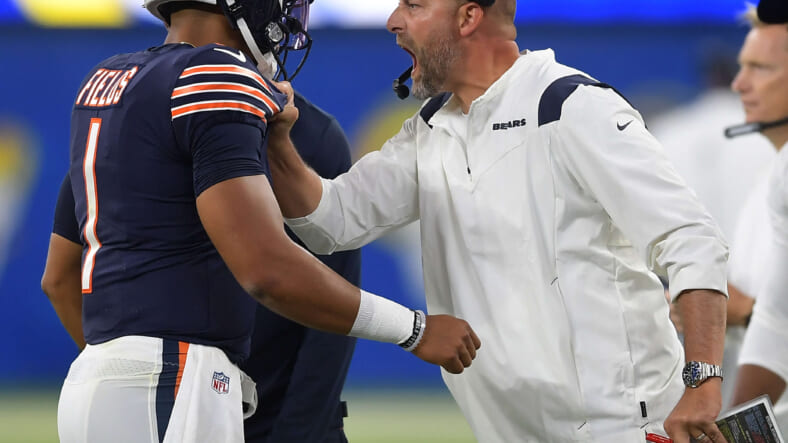 The hot seat is a conversation that nobody wants to have in the NFL. Nothing is different for Matt Nagy and the Chicago Bears, who currently sit in the middle of a four-game losing streak, having lost the last two games by a total of 13 points.

Much has been made of Nagy’s future with the Bears. Some believe the fourth-year head coach is on his way of Chicago while others see Nagy’s investment in Fields as guaranteed job security in 2022.

Bears ownership doesn’t seem to be overly thrilled that Nagy is likely heading towards another mediocre season however, Fields progression between weeks eight and nine cannot be denied and if Fields continues to progress, Nagy could return in 2022 with a clean slate.

With just three wins heading into week 10, the Bears front office has plenty of time to evaluate whether or not Nagy can rightfully be the guy to lead the Bears in 2022. Fields promising returns likely means the McCaskey family will likely wait until the very end of the season to move on from Nagy.

The Bears’ expectations for 2021 also changed once Fields was drafted. Expectations went from making the playoffs and having a winning season to ensuring Fields would develop properly.

What clouds Nagy’s future with the Bears, even more, is that it’s hard to judge who’s really behind Fields development. Is the so-called plan that Nagy referenced throughout training camp the reason Fields is developing? Or did a change in playcaller from Nagy to offensive coordinator Bill Lazor, lead to a more QB-friendly system for Fields, who excels under center and in the play-action game.

What happens over the next eight weeks will be worth monitoring. The Bears are on the outside looking in when it comes to making the playoffs, however, even if Fields continues playing at a high level, ownership could look at 2021 as a positive, giving Nagy one final chance in 2022.