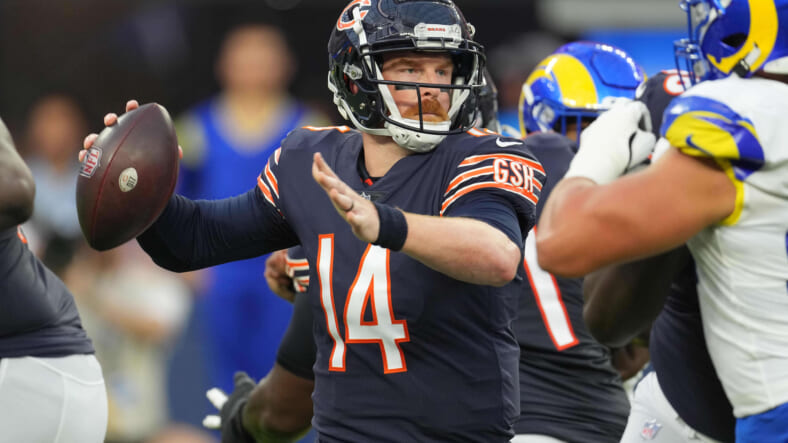 Currently, in the middle of a five-game losing streak, the Chicago Bears now look ahead to week 12 for a Thanksgiving Day matchup against the Detroit Lions. But first, let’s recap week 11.

1) There are two players of the game in this one, both on defense. Robert Quinn and Roquan Smith kept the Bears in this one, especially with the defense missing Khalil Mack, Akiem Hicks, and Eddie Jackson. Props to Quinn for turning in such a monstrous performance with 3.5 sacks, five tackles, three TFL, and four QB hits. Smith had 17 tackles on the afternoon, the most by a Bears linebacker since 2009.

2) Regarding Justin Fields, who has bruised ribs, the Bears have a decision to make. If it were in Fields hands, he’d be dressing up on Thursday afternoon against the Lions. Ultimately, with seven games remaining, the Bears should play it safe with Fields and sit him in a meaningless game. Give the future of the franchise a little over 10 days to get right before the Arizona Cardinals come to town on December 5th. It’s better for the Bears to have Fields healthy for the final six games of the season, a stretch that includes playing the Seattle Seahawks, Green Bay Packers, New York Giants, and Minnesota Vikings (twice).

3) The Bears got away from the running game early in this one and it showed. Khalil Herbert had just one carry for zero yards while David Montgomery had 14 carries for 58 yards, averaging 4.1 yards per carry. Keeping the ball out of the Ravens’ hand should’ve been a goal of the Bears but Chicago failed to do so consistently throughout the afternoon. The Bears coaching staff needs to realize that neither Fields nor Andy Dalton can fully the offense, which means knowing your limitations of what skill position players can and can’t do is vital when it comes to offensive philosophy.

4) At times, it may not have looked like it but wide receiver Darnell Mooney had a game. Mooney’s quickly establishing a reputation as a big-play threat in the Bears offense. With five receptions for 121 receiving yards, averaging 24.2 yards per reception, the second-year wide receiver made his presence felt all afternoon, especially on a 60-yard touchdown pass from quarterback Andy Dalton.

5) This was what you could consider the Marquise Goodwin breakout game. Goodwin added to the Bears’ explosiveness on offense, with four receptions for 104 yards, including a 49-yard touchdown pass to give the Bears the lead late in the fourth quarter. This game needs to serve as an example of how the Bears can continue to utilize Goodwin moving forward.

6) The Bears struggled to execute consistently but another issue is playing good situational football. Matt Nagy needs to understand the Bears aren’t getting the job done right now and much of it is due to coaches being able to react in situations. An example of this is when the Bears burned a timeout with 1:41 left to go in the fourth quarter after failing to convert a two-point conversion.

7) The Bears also struggled to get off the field on third down in this game. Baltimore was 7-for-16 on Sunday afternoon, with the game’s biggest play coming on a 3rd-and-12 where Ravens quarterback Tyler Huntley hit wide receiver Sammy Watkins for a 29-yard gain with just 0:33 left in the fourth quarter. The Bears defense has struggled to consistently get off the field on third down this season and it’s only going to get harder over the final seven weeks of the season with Mack being out.

8) Speaking of giving up a big gain on 3rd-and-12, guess what? The Bears’ secondary isn’t very good without Eddie Jackson but Jaylon Johnson had a nice showing. Second-year CB Kindle Vildor got rocked all afternoon while Deon Bush and DeAndre Houston-Carson were beaten as a result of miscommunication. The entire unit needs an overhaul in 2021 with just Jackson and Johnson guaranteed to start.

9) What does this loss mean for the Bears? Well, Chicago’s final seven games are against NFC North opponents. But understand the Bears were on the outside looking playoff-wise heading into week 11. This latest loss digs the Bears even deeper into a hole that’s getting harder to get out of.

10) For the rest of the season, nothing matters for the Bears except seeing what sticks on the wall for 2022 and beyond. Essentially, for the Bears, 2022 has already started despite 2021 not being over yet. The Bears’ future is already on the roster in Fields but the front office needs to figure out who’s staying in 2022 in an effort to build around Fields. That means taking a hard look at players and more importantly coaches.