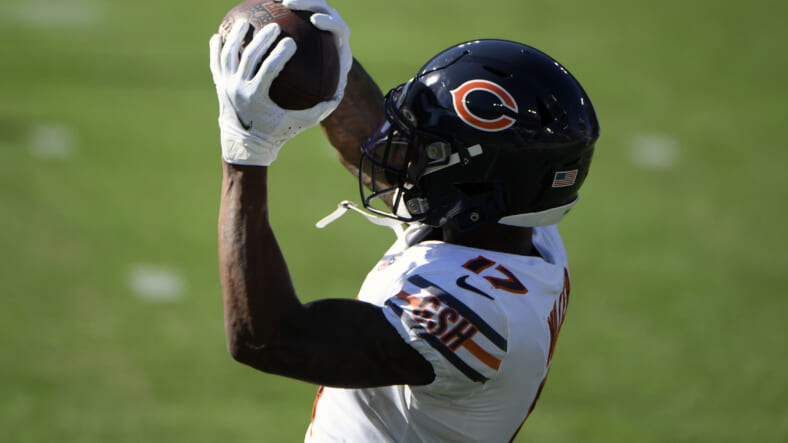 As the Chicago Bears offseason continues, the team has a number of questions to answer heading into the 2021 NFL regular season. One major question that will linger throughout the duration of the offseason is the future of fourth-year wide receiver Anthony Miller.

The former second-round pick’s career with the Bears has been up and down. After seven receiving touchdowns during his rookie season in 2018, Miller has been inconsistent throughout 2019 and 2020. Heading into the final year of his rookie contract, Miller is on the roster bubble. A strong performance throughout OTA’s and training camp means Miller will be back with the Bears in 2021. If not, he’ll be part of the final cuts in August when the Bears begin trimming the final 55-man roster.

As Miller enters a contract year with the Bears, what must he do to make the Bears roster?

Over the last three seasons, Miller has hauled in 134 receptions, 1564 receiving yards, and 11 touchdowns. He’s shown the ability to play on either in the slot or on the outside, while also consistently getting open in the passing game. With a 64.5 catch percentage in 2020, the highest of Miller’s career, he’s showcased the ability to have good hands, something which will be valuable when an accurate quarterback is able to consistently hit Miller in space. Miller has also averaged 4.13 yards after the catch over the last three years, which shows his ability to do some additional damage with the ball in his hands.

As good as Miller has shown he can be at times, his inconsistent play and lack of discipline has cost the Bears at times. Flashback to the 2019 season, where Miller was flagged for a taunting penalty against the Las Vegas Raiders in London, in a game where the Bears were already being dominated. Who could forget the Wild Card game against the New Orleans Saints, where Miller was ejected for unsportsmanlike conduct. Despite appearing in all 16 games last season, Miller averaged just three receptions per contest and failed to hit 100 yards all season, making it clear that due to the emergence of wide receiver Darnell Mooney, Miller’s role was diminishing within the Bears, especially after only playing just 55 percent of snaps on offense.

As mentioned above, it’s simple for Miller. A strong performance means that he’ll be on the Bears roster for 2021. However, Chicago’s front office and coaching staff could decide that Miller has enough talent to warrant keeping him on the roster, mainly due to the fact that general manager Ryan Pace has gambled on players going into a contract year, only to see the light fully turn on in year four. The very same could be said for Miller who could be primed for a big year with Andy Dalton and Justin Fields ready to take over at quarterback for the Bears.