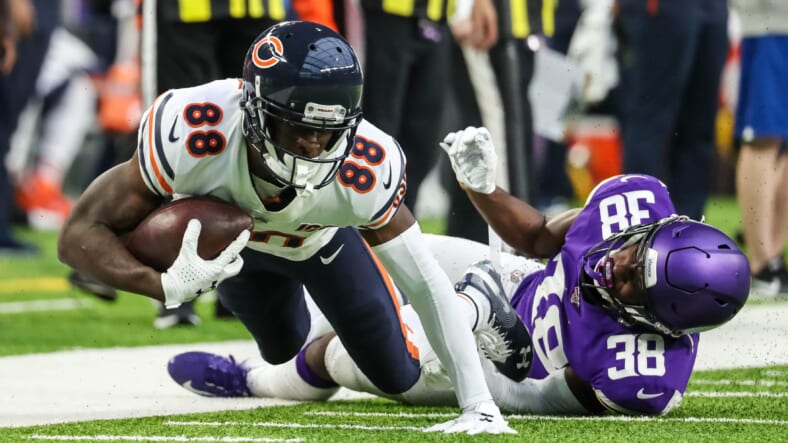 Heading into the 2021 NFL season, the Chicago Bears will have a number of roster decisions to make, with the future of wide receiver Riley Ridley being one of them. Once viewed as a promising mid-round pick with potential, Ridley has yet to make any sort of significant impact for the Bears, now putting his future into question.

Having played just ten games over the last two seasons, with just one start, Ridley has 10 receptions, 108 receiving yards, and zero touchdowns. Playing behind Allen Robinson, Anthony Miller, Darnell Mooney, and Javon Wims has done Ridley no favors but it’s clear he hasn’t performed enough to warrant getting any gameday opportunities.

With Ridley going into year three, why is he on the roster bubble? Let’s find out.

The case for keeping Ridley

As mentioned above, Ridley’s lack of gameday experience is due to the presence of Robinson, Miller, and Mooney. Simply put, Miller hasn’t gotten enough reps with the first team in practice to warrant seeing enough snaps on offense during actual games. An excellent route runner with solid hands, and a knack for 50-50 balls, Ridley’s got the skillset that most wide receivers need to be successful in the NFL.

For a player who can play outside or in the slot, Ridley has a lot to prove if he’s going to make the Bears roster. He needs to show up in training camp and preseason games but will likely end up as WR5 or WR6, depending on how many WR’s the Bears decide to carry on the final roster.

The case for cutting Ridley

Chicago added a number of wide receivers this offseason, with the goal of getting faster on offense. Speed has never been a strong suit for Ridley, who struggles to create separation at times. This means that Ridley needs to win matchups by being more physical against defensive backs.

With Chicago wanting to emphasize speed on the offensive side of the ball, it’s very tough to see Ridley carving out a true role unless he makes significant strides or the Bears decide to keep him around on special teams. As mentioned above, Ridley’s lack of impact in games is also a question. Has he just not been able to adjust to the NFL level or not gotten enough opportunities to showcase what he can do?

Ridley’s case is a tough one to solve. The skillset he brings makes him an asset to an NFL offense but his lack of speed and inability to see the field consistently lead to questions about how good he really can be. With a loaded wide receiver room, Ridley will likely make it to the final week of August but could be one of 37 players that Chicago decides to cut if he doesn’t have a strong offseason.