Chicago Bears must evolve and adapt with team identity 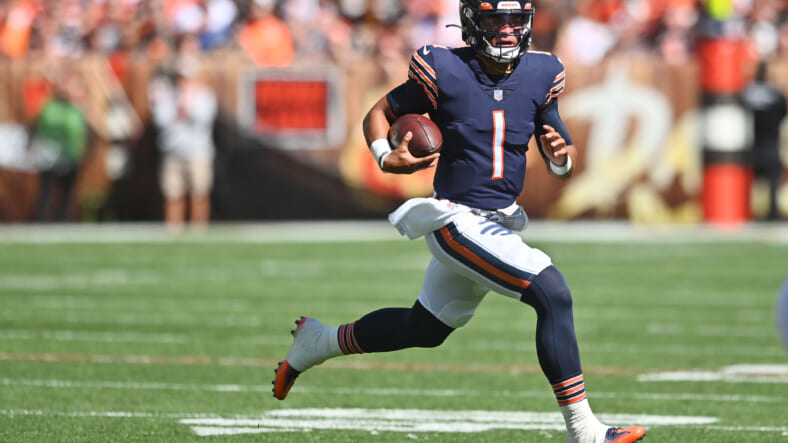 The Chicago Bears will be leaving Las Vegas with a big road win and some momentum heading into a Week 6 home matchup against the division-rival Green Bay Packers. Over the last three weeks, we’ve gotten a sense of what the Bears’ identity is as a team: The defense is the backbone while the offense is built on a solid running game.

Chicago’s formula for success has worked so far. Sunday against the Las Vegas Raiders was a clear example of how the running game has quickly become a strength of the Bears’ offense. Damien Williams and Khalil Herbert combine for 34 carries, 139 rushing yards, and one touchdown, averaging 4.1 yards per carry.

“When the running game is going like this, we can do a lot of things on offense,” quarterback Justin Fields told CBS Sports Evan Washburn after the game. “Hopefully we can keep that going and keep winning games.”

The numbers also reflect that the Bears identity is run first. Chicago controlled the ball for just over 32 minutes on Sunday afternoon, which equates to around 50 percent. As a passer, Fields was 12-for-20 with one touchdown and 111 passing yards. This is the second straight week Chicago has taken a somewhat conservative approach with Fields as a passer.

The Bears will need to open up the offense more, allowing Fields to make plays through the air. With games against explosive offenses such as the Green Bay Packers and Tampa Bay Buccaneers looming, a solid ariel attack will allow Chicago to keep pace with both teams.

The Bears passing game did have some bright moments in week 5, including a 13-yard pass from Fields to wide receiver Darnell Mooney on 3rd-and-12 with just 7:26 to go in the fourth quarter. Fields fit the ball into a tight window between two Raiders defenders, giving Mooney a chance to make a play.

“That’s just a timing throw,” Fields said after the game. “So we practice that all throughout the week. Just that look, just trying to get a first down, trying to keep the drive going, it was a great catch by Mooney, and a great call.”

Chicago’s identity has been solid so far, however, as the season continues to progress, the Bears will need to adapt to continue winning games, and prevent other teams from figuring out a way of stopping the offense.