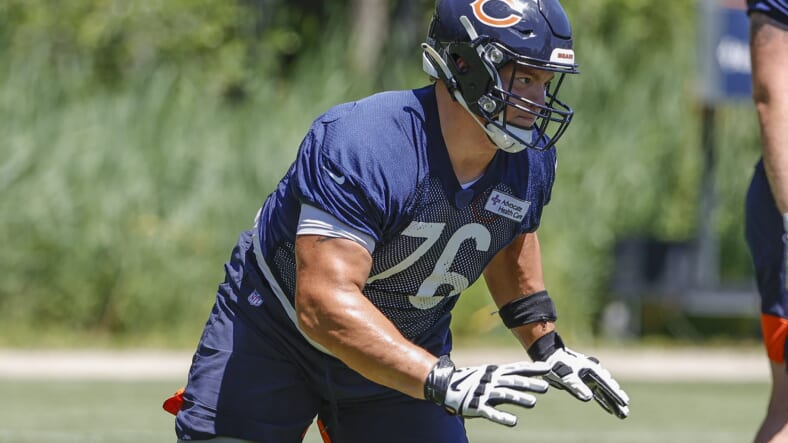 Lake Forest, IL–Â When the Chicago Bears drafted offensive tackle Teven Jenkins in the second round of the 2021 NFL Draft, the assumption was that Jenkins would begin the season at left tackle and eventually develop into a franchise cornerstone. Instead, Jenkins was shut down in late August due to back surgery, forcing the Bears to sign veteran OT Jason Peters, who’s previously played for the Buffalo Bills and Philadelphia Eagles.

When Peters injured his ankle in week 14 against the Green Bay Packers, Chicago was forced to turn towards Jenkins, who was flagged on four separate occasions in his first official NFL action. As the Bears return home to face the Minnesota Vikings, there is an important question that needs to be asked: Who will the starting LT be?

The Bears know and understand the impact of having a veteran like Peters be able to start. However, for the Bears, 2021 isn’t about Peters, it’s about the youth on the roster. With Jenkins being the future of the Bears franchise, the obvious answer would be to give the 39th overall pick the starting nod over the final four weeks of the regular season.

“I mean if he’s (Jason Peters) is healthy, for him, what I’ve been saying that what he’s done this entire year, helping us out, where he’s at the same point in time, with Teven, I do believe that yesterday (Sunday), for him was, although we had some holding penalties, he had a couple things here and there which can be significant, he can learn and grow from,” said head coach Matt Nagy via the Bears official YouTube Channel.

While Jenkins’ performance in week 14 against the Packers may have been a game to forget according to some, for the Bears to move forward with Jenkins and see improvement, Jenkins needs to get extended playing time. When the Bears drafted Jenkins, they saw his potential to develop into a multi-year starter who could protect Justin Fields blindside for at least the next decade.