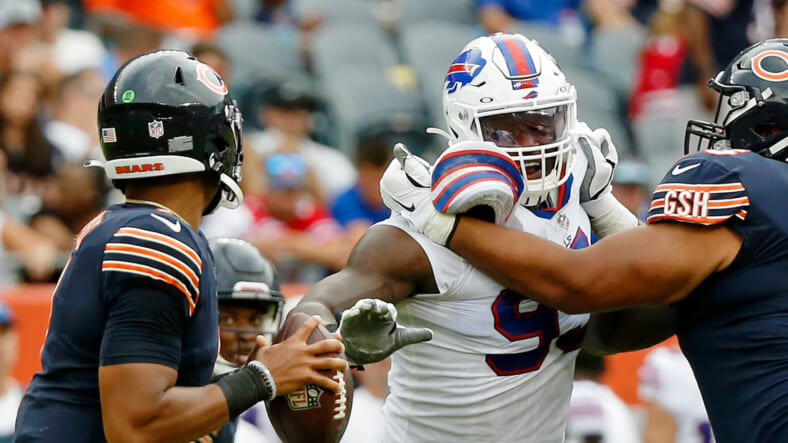 When the Chicago Bears drafted offensive tackle Larry Borom in the fifth round of the 2021 NFL Draft, the former Mizzou product entered his rookie season with a chance to compete for the starting job at right tackle. A sprained ankle sustained in the Bears’ week one loss against the Los Angeles Rams would sideline the 151st overall pick, until week eight, Borom’s first career start.

â€œI thought Larry did a wonderful job,â€ Nagy said via the Bears official YouTube channel. What a great challenge to go against one of the best D-ends in the NFL and I thought he held his own.”

The D-end that Nagy is referring to happens to be 49ers pass rusher Nick Bosa. On track to start a second consecutive game, Borom will be matched up against Steelers pass rusher T.J. Watt on Monday night in what should be an enticing matchup to monitor.

Borom’s ability to slow down Watt won’t go unnoticed. In an opposite viewpoint, a bad performance would be a forgettable night, with the Bears’ bye week giving Borom an extended time to evaluate and self-reflect, as Borom continues to develop.

â€œThatâ€™s one of the things that will be good for us to evaluate and see where heâ€™s at, both mentally and physically,â€ Nagy said. â€œI thought Larry has done a great job when given the opportunity to play. So coach Juan and coach Donnie will see where heâ€™s at conditioning-wise. But heâ€™s been working hard, so weâ€™re gonna really push him to see where he can go.â€

Another strong performance from Borom could indicate the Bears have a long-term building block on the right side of the offensive line. Much of the Bears’ struggles over the last two seasons have been at right tackle, with veteran Bobby Massie being released during the 2021 offseason.

Opportunity awaits Borom, who is the assumed Bears starter of the future at right tackle. What happens over the second half of the season will set the tone for whether or not Borom can be labeled a breakout candidate heading into 2022.