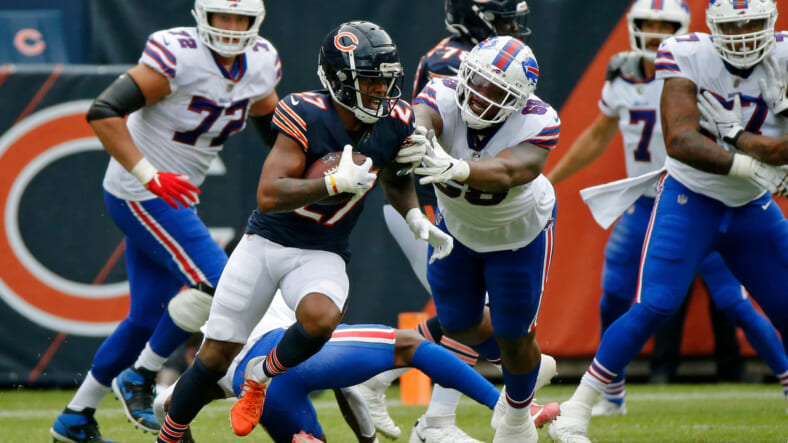 CHICAGO, IL–As the Chicago Bears navigate a COVID-19 outbreak at Halas Hall, week 15 provided the Bears with an opportunity to allow some younger talent to see significant playing time in what has become another lost season for the Bears. One name that jumped off the screen on Monday night was cornerback Thomas Graham Jr., a sixth-round pick in the 2021 NFL Draft.

In Graham Jr’s. first official start, the rookie managed to total seven tackles and three pass breakups, proving as to why Chicago should’ve never stashed him away on the practice squad to begin the 2021 season. The Bears’ lone bright spot at CB this season has been second-year starter, Jaylon Johnson and as the search continues for a true CB2, Graham Jr. could provide a solution.

Versatility is often a big asset when talking about defensive backs in today’s NFL. Luckily for Graham Jr., the Bears moved him around from inside to outside multiple times throughout the evening. During the second quarter, Graham Jr. made his presence felt by breaking up a pass in a third-and-seven situation at the Minnesota 15-yard line, forcing the Vikings to mount. The very next drive, the Bears’ offense would march down the field and score three points. When Graham Jr. was asked to cover star Vikings wide receiver Justin Jefferson, he excelled, even forcing Minnesota into a 3rd-and-18 situation after breaking up a pass in the third quarter.

“I think we all saw that he performed well today,” said defensive lineman Akiem Hicks. “I’m happy for him, to get that opportunity, look to see what’s next for him.”

One game is just a sample size from Graham but the potential that was on display throughout the afternoon is encouraging for a team that’s already looking forward to 2022. With the Bears having lots of needs to address during the upcoming offseason, having a quality CB2 on a rookie contract with a high ceiling bodes well for a team that will need to revamp the roster over the next few years.